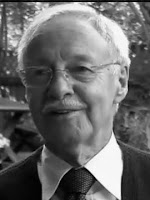 Composer Dudley Simpson has died at the age of 95. He died in Australia on November 4th. Simpson was best remembered for his work on the Dr. Who TV series. Dudley worked on at least 290 episodes, writing the score to over 60 stories. His music provided the soundtrack to the majority of the adventures of the first four Doctors as well as contributing some of the most iconic TV Theme tunes, writing the title music for Blake's 7 and The Tomorrow People. He also wrote the music for two classic British TV western films “The Last of the Mohicans” (1971) and “Hawkeye”, the Pathfinder (1973). Simpson retired in the 1990's and returned to his native Australia. He returned to the UK in 2013 to help celebrate Doctor Who's 50th Anniversary
Posted by Tom B. at 6:42 PM