Bud Spencer, honored with a statue in Budapest 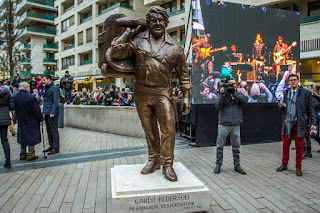 Fans of the late Spaghetti western actor Bud Spencer unveiled this past Saturday a statue in his honor, but not in his native Italy, or in Almeria, where some of his films were shot, but in Hungary, where he is the object of a true cult following.

The Bronze Statue, more than two meters tall and representing the Italian Cowboy Actor, carrying a saddle on his back, was unveiled in a pedestrian street in Budapest in the presence of his two daughters.

Following the death of bud Spencer, in June 2016, at the age of 86, the tribute was proposed in the Budapest City Hall by the Sculpture’s artist and received enthusiastic approval from the authorities. Budapest already has a park named after the actor.

The Spaghetti Western made this actor a star along with his inseparable companion Terence Hill between the late 1960 s and early 1970 s, some of them in the desert of Almería, Southern Spain, were curiously popular in Communist Hungary during those years and whose regime considered them harmless.

"it was a bit of the West, of the freedom, to which we could have some access" explained to the press, by a 43-Year-old grocer who came to the opening.
Posted by Tom B. at 6:07 AM