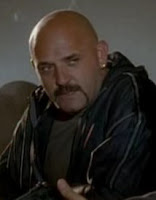 Gianluca Petrazzi died in Rome on November 1st. He was among the most prominent stunt men and stunt coordinators in Italy and abroad. Born in Rome, Italy on September 3, 1966 he was only 51 years old. Petrazzi appeared in one Euro-western: “Buck and the Magic Bracelet” (1996) in the role of Ezechiele. He was the son of assistant director, actor Riccardo Petrazzi [1938-2003] and brother of actor, stuntman Francesco Petrazzi. As the son of trapeze artists and other descendants of a circus family, he began his stunt career at the age of 9. He participated in more than 100 films, as a stuntman and stunt coordinator, he lead the action unit on countless films. As director he made several short films and in 2013 directed his first feature film "Criminal Rome". His lone Euro-western was as Ezechiele in 1996's "Buck and the Magic Bracelet"
Posted by Tom B. at 3:59 PM