Who Are Those Gals? ~ Stefania Careddu 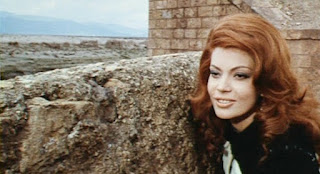 Stefania Careddu di Sambrese was born in Bergamo, Lombardy, Italy on January 12, 1945. Stefania is the daughter of the writer Mariana Frigeni [1909-1997] and became enthusiastic about acting at an early age. After auditioning for Nelo Risi, she debuted in 1965 in an episode of “I soldi”, before gaining a minor role as an elegant and wealthy girl in “Risis Andremo in città”. Her career, however, never really blossomed and she only appeared in small roles in genre films (sometimes under the pseudonym Kareen O'Hara) as window dressing. She ended her career in 1977 after about a decade of activity and only 14 appearances, except for a short television engagement four years later.