Who Are Those Guys? ~ Bernie Casey 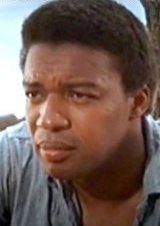 Bernard Terry Casey was born in Wyco, West Virginia on June 8, 1939. The son of Flossie (Coleman) and Frank Leslie Casey, he graduated from East High School in Columbus, Ohio.

Casey was a record-breaking track and field athlete for Bowling Green State University. He earned All-America recognition and a trip to the finals at the 1960 United States Olympic Trials. In addition to national honors, Casey won three consecutive Mid-American Conference titles in the high-hurdles, 1958–1960.

Bernie was drafted by the San Francisco 49ers in 1961. He played for eight NFL seasons: six with the 49ers and two with the Los Angeles Rams.

Casey began his acting career in the film “Guns of the Magnificent Seven” (1968), a sequel to “The Magnificent Seven:. Then he played opposite fellow former NFL star Jim Brown in the crime dramas “...tick...tick...tick...” and “Black Gunn”. He played the title role in the 1972 science fiction TV film “Gargoyles”. He also played Tamara Dobson's love interest in 1973's “Cleopatra Jones”.

From there he moved between performances on television and the big screen such as playing team captain for the Chicago Bears in the TV film ‘Brian's Song’. In 1981, Casey played a detective opposite Burt Reynolds in the feature film “Sharky's Machine”, directed by Reynolds. He reunited with Reynolds a few years later for the crime story “Rent-a-Cop”.

In 1983, he played the role of CIA agent Felix Leiter in the non-Eon Productions James Bond film “Never Say Never Again”. He co-starred in “Revenge of the Nerds” and had a comedic role as Colonel Rhombus in the John Landis film “Spies Like s”.

Also during his career, he worked with such well-known directors as Martin Scorsese in his 1972 film Boxcar Bertha and appeared on such television series as The Streets of San Francisco and as U. N. Jefferson, the national head of the Lambda Lambda Lambda fraternity in Revenge of the Nerds.

Bernie lived in Los Angeles, California where he enjoyed painting and writing poetry. Look at the People, a book of his paintings and poems, was published by Doubleday in 1969.