A video showing a UFO by director Corbucci?

This article was born thanks to a curiosity stemming from a comment on a forum, the commitment of two excellent UFO researchers, Mario Maisto and Ivan Ceci who at the time investigated the fact that the great Italian director Sergio Corbucci boldly described publicly a UFO sighting that he himself recorded, a video that would seem to have disappeared while being of great value for UFO research.

I first watched on You Tube an old interview by director Costanzo where the sighting was explained:

In 1968, at sunset, in the town of Torrelaguna, a few kilometers from Madrid in Spain, the filmmaker, along with all his film crew, filmed an object similar to an overturned bell, a huge object in the sky during the making of the "Mercenary" which was recorded with a 35mm camera.

An exceptional document just because it's taken over by specialized operators with rather sophisticated cameras ...... unfortunately all traces of this documented sighting have been lost.

The confirmation of this video comes from actor Cristian De Sica during an episode on a television broadcast "Some time ago where the actor said he saw the video even if he is wrong about the movie that it is not about “Vamos a matar compañeros" also shot in Spain, but it was the Mercenary.

The same actor Franco Nero, who together with Tony Musante was the co-star of the film, confirmed the sighting and the existence of the video.

Only in 1984 during the RAI TV program "Italia Sera" on November 25, 1983 conducted by Mino Damato and Enrica Bonaccorti where a part of the video was show where an egg object can be seen.

Since that day, this video and the installment of the program have disappeared, we only have a transcript made by a CISU researcher of an audio recording (at that time the technical means were rather limited) that has now disappeared on the internet because of a so called Copyright infringement, as shown below.

Below we can still read the interview

Interviewer: ... we hear another testimony of Sergio Corbucci's filmmaker who glimpsed and I want to say a glimpse, he saw a UFO years ago, how did the sighting take place?

Corbucci: Eh, yes ... we were shooting a movie at sunset, we were shooting a close-up of an actor Volodymyr Palahniuk aka Jack Palance. I looked behind him and in the sky I saw a strange object, not only me, but by all the crew, a strange bell like object upside with other ones, big transparent balls, which were in the sky and stationary. It practically stayed there for a long time, we resumed filming immediately, I thought it was something, another object so I did not think twice about it ... also because you don’t think about other cases of ... the Martians. We thought maybe… it was a weird piece of paper floating in the air. Returning home that night to Madrid we made an official report that also in the city it had been spotted .... and photographed by some so they were quite similar I think there are the same object.

Interviewer: Here we see the document a moment, Lucio Testa please can you pass the document, we see the image that was shot by the camera operator of Corbucci.

Corbucci: Here's the object exactly as you can see a kind of overturned bell with these big balls, standing still, while I calculate that this should be at least two or three thousand meters away maybe, perhaps more because it may have been even further. It should be as big as am aircraft carrier, the odd thing that you see are it’s the same as that seen in Madrid. 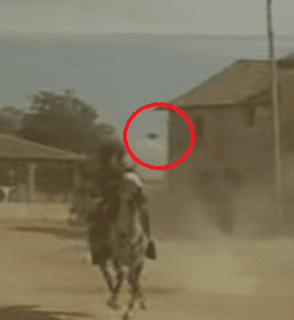 Interviewer: This is not the original document why, what happened?

Corbucci: Well, the same evening returning to Madrid I was approached by some…

Corbucci: Maybe officials, in short, the American Embassy, ​​who asked to see the original material in the lab, I agreed, the lab gave them this material, but for me I retained a copy of what this whole side can see that it is.

Interviewer: The original has disappeared; UFOs will say they may be guarded in Washington in some secret place.

Corbucci: The thing, more than anything maybe, but the strange thing is that the next day I saw another thing going to another place on the next day about 250 km from there, .... speaking of the facts about all the newspapers that morning we arrived at the workplace that was at Cuenca .... There it was once again the same object but this time unfortunately I did not have the camera because we still had to get the material and this object ... was approached by military aircraft .... for a long time …. and then it disappeared .... after about fifteen minutes.

There are so many elements that can confirm the sighting, what is important is to consider the sighting that at the same time occured in Madrid.

In practice, in Madrid, it was seen by thousands of citizens who even stopped their vehicles to get better view, even the Spanish Air Force sent some F-104s to investigate.

The object was pyramidal, stayed in the sky for about an hour and then disappeared. Below we have a picture of the object: 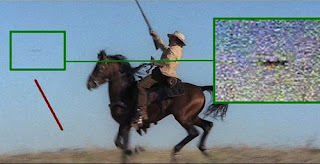 The film director filmed a UFO during a film shot in Spain similar to another photographed almost at the same time in Madrid. At the request of some American officials, a copy was perhaps handed over to NASA and the other was granted to RAI

In short, an important document destroyed?

Is this the end of the story? A story that obviously did not satisfy me.

To evaluate the degree of Cover-up of Rai and Nasa, I wanted to beat the silence of the incident.

I sent this email to RAI

When I asked if it was possible to publish the video or at least useful information to find it ... the answer was very vague, it did not give any indication, explaining that in order to use RAI videos I had to pay ......  it was unclear ...

Desperate I turned to Jacob, even here no answer ... ..

But I did not lose heart: I noticed that the researchers inspected the wrong film "Vamos a matar compañeros"

So the "Mercenary" could be virgin from Ufological inspections, that is, you might see something flawed in the FILM (Corbucci quoted above)?

I had the patience to watch the movie frame by frame and there’s something weird that I noticed.

Obviously evaluate everything that follows with the due caution and if there is someone who disagrees and is normal. I would recommend telling me my mistakes or contradictions (my will and understanding, if I am being ignorant eh!)

Towards the end of the film when Franco Nero and Tony Musante on horseback enter a Mexican town, I noticed a strange object. Below the photo with the object indicated by the red circle

The only thing to do is to evaluate the similarities between this object and that of the one seen in Madrid, which in turn, as Corbucci affirms, is similar to its video.

So we set out to compare the objects

There is no more'? perhaps

The only thing to do is to evaluate there similarities between this object and that of Madrid, which in turn, as Corbucci affirms, is similar to his video.