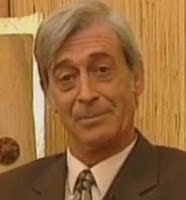 Spanish voice dubber Francisco Dumont Peña died in Granada, Spain on September 6, 2017. As a 25 year-old radio announcer, in order to raise funds to benefit the nursey of Santa Escolástica in Granada, he talked non-stop for 25 hours and 15 minutes beating the Guinnes Book of Records time of 24 hours and  45 minutes. He would go on to be an actor and voice dubber of some note. He was the Spanish voice of Nino Marchetti in 1970’s “Reverend Colt”.
Posted by Tom B. at 6:14 AM