We continue to our search for filming locations for the 1970 film “Adios, Sabata”. After the killing of the informer Moreno the scene shifts to Senor Ocano arriving back in a town controlled by the revolutionaries. There he is greeted by Escudo who uses a metal triangle to summon the villagers together. Ocano calls the names of three of his men, who step forward among them is Luis Miguel Cotero. Ocano asks Escudo if he approves of the men for a mission. Escudo is given a look by the deaf Septiembre who points out Cotero with his eyes and by clinking two steel balls together. When Escudo examines him closer he finds a bag of coins given to him to spy on the revolutionaries by Colonel Skimmel. Septiembre drops one of the steel balls onto his shoe and whips it into his Cotero’s face. Escudo tells Ocano that Cotero is a spy and summons Gitano to perform the flamenco of death. When Gitano reaches the climax Escudo shoots and kills Cotero. Ocano sends Ecudo to help Sabata and his mission to get Skimmel. 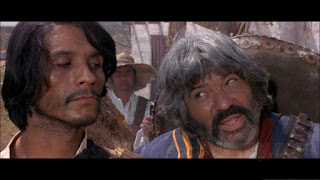 This location is the Mexican village outside of Rome.