Mustang Gray was supposedly based on a real Texas Ranger by the same name. The comic book series was created by Italian artists and published by Mercury Editoriale and was also published in the UK magazine, Western Picture Library. One of the artists was Camillo Zuffi (1912-2002). The main artist, however, was Armando Bonato who later worked on the fumetti, via Diabolik. From a quick glance, Mustang Gray seems very similar to Tex Willer, the best known of the Italian Western comics. Mustang Gray consisted of 12 issues from 1958-1960 with 100 pages per issue. 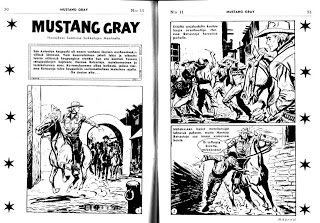 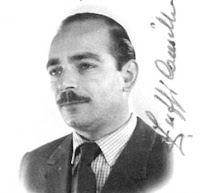 Camillo Zuffi was born in Bergamo, Italy on April 19, 1912. He was the creator of 'Il Piccolo Sceriffo', together with writer/publisher Tristiano Torelli, which first appeared in 1948. He also worked with the characters 'La Jena', 'Bonnie' and 'Tex Tone'. He worked primarily for the Italian and French markets, but was also present in Britain with 'Kit Carson' in Cowboy Picture Library and 'Mustang Grey' in Pearson's Western Picture Library. He illustrated several issues of 'I Misteri della Giungla Nera' from 1977. Zuffi died in Italy on April 4, 2002.