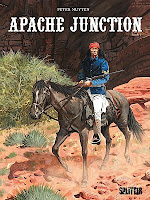 After the death of Cochise, the Apaches continue to make trouble. In 1875 the Chiricahua Apache Black Wolf fled together with a group of warriors from the San Carlos reserve. For fear of a new war, Fort Apache immediately sent the courier Roy Clinton to Fort Bowie to warn them. On the way he finds a burnt-out car with the corpse of an unknown man in it. After he has buried him, the attack by two Apaches becomes almost the doom. He is severely wounded and reaches the Bentley Farm. From that moment on, Clinton is involved in an extremely delicate matter ...

A Netherlands western comic book published by Splitter Verlag in three issues from April 2014 to February 2017, authored by Peter Nuyten. 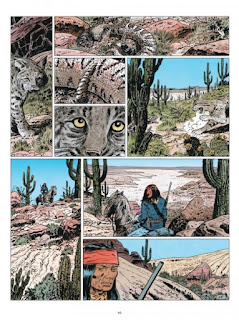 Peter Nuyten was born in 1965 in The Netherlands. He  studied graphic design between 1988 and 1992, after which he became a freelance designer. In the 1990s, he was member of Studio Iris in Nijmegen, and published his comic 'Arak' in the studio's small-press magazine of the same name. He has done illustration assignments for educational books, children's books and history related topics. He was a member of Studio Jan Kruis from the start in 1999, where he worked on the 'Jan, Jans en de Kinderen' comic for Libelle magazine. When the studio closed down in 2007, he continued to work on the comic as an inker on a freelance basis.

His first book was the historical comic 'Auguria' was published by Silvester in 2010. In the following year, Nuyten turned to the western genre and published 'Apache Junction', about the merciless hunt of the American army for Apache guerrillas.