Who Are Those Composers? – Giuseppe Becce 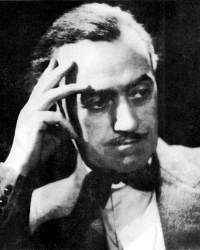 Giuseppe Becce was born in Lonigo, Vicenza, Italy on February 2, 1877. He showed his musical talents early and was named the director of the student musical orchestra at Padua University where he studied geography. In 1906 he moved to Germany and studied musical composition with Arthur Nikisch and Ferruccio Busoni. In the 1913 silent movie Richard Wagner, directed by Carl Froelich, Becce played the title role and wrote the accompanying music. He continued to write such music for a series of subsequent movies. A collection of these pieces, the so-called "Kinothek" was published between 1919 and 1933 by the Verlag Schlesinger'sche Buchhandlung in Berlin.

From 1915 to 1923, Becce was the director of the little orchestra of the Berlin Mozartsaal am Nollendorfplatz. After World War I, he was named to direct the music department of the Decla-Bioscop AG and was named chief director of its movie orchestra, later to become the Universum Film AG (UFA) orchestra. He also worked at major movie theatres as director of the orchestras, among them the Ufa-Pavillon am Nollendorfplatz, the Tauentzien-Palast, and the Gloria Palast. In this position he worked with many famous directors of the German silent movie era, namely Fritz Lang, Friedrich Wilhelm Murnau, Georg Wilhelm Pabst, Ernst Lubitsch, Ludwig Berger, Joe May and Berthold Viertel; he arranged and composed music for their movies. In 1920 Becce published the magazine Film-Ton-Kunst. In 1927 he published, together with Hans Erdmann and Ludwig Brav, the Allgemeines Handbuch der Filmmusik; it was based on his Kinothek, amongst other items, and enabled the pianist of silent movies to accompany movies in the generalized style and motifs of renowned composers.

With the arrival of sound movies Becce worked on musical movies and movies covering opera or operetta themes. He worked with Leni Riefenstahl, Luis Trenker, and Harald Reinl whose mountain films he scored. Becce was very prolific providing music to movies for more than four decades; he commonly mixed his own compositions with creations of other composers.

Becce died in Berlin on October 5, 1973 and is buried in the cemetery of Berlin-Wilmersdorf, Berliner Straße.