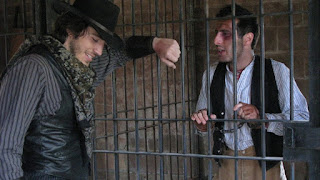 A storm is brewing in the town of Vermijo. Frank Tyler's plan was simple. He was going to dispense good, old-fashioned justice - one bullet at a time.

In the late 1870s the Lockhart brothers arrived in town.

There were some rogue elements still unsettling the regular townfolk, so when the Lockhart brothers offered their services to maintain peace again in the community the good townspeople of Vermijo  accepted their proposals.

Jim, Ace and Carl Lockhart all started out with good intentions and settled in to the community.  Shortly after their arrival Ace Lockhart married one of the local girls, Eve, and they lived close to town in a small cabin.

However it was not long before the brothers realised that these townsfolk were easy "prey".  They soon started to "protect" the town in their own particular way.

Suddenly it was a good idea not to cross any of the brothers, especially Ace who had a short fuse.

Luke Tyler had been on the trail for a few days and rode into Vermijo for a quiet drink. Instead he came face to face with one of the brothers.

It was a pity that Luke Tyler did not ride on.  Things may well have turned out differently if he had.