We continue to our search for filming locations for the 1970 film “Adios, Sabata”. The scene now shifts back to Colonel Skimmel and his men preparing a load of gold to be transported by wagon, Skimmel watches as the wagon and military escort leave the Mexican village he uses as his headquarters. 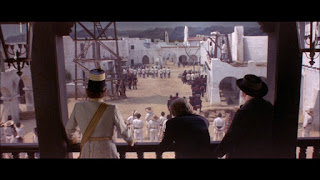 This scene was filmed at the Mexican village outside of Rome and also used in “The 5-Man Army”.