The Man With an Action Filled Past

For 27 years, he has been directing the Freilichtbühne in the Wallanlagen with a lot of Herzblut: Wilfried Zander (74), the man with the unmistakable Brandenburger dialect, has a dazzling past: Zander was for decades a stuntman, among other things even in a film with starring U.S. actor John Malkovich. 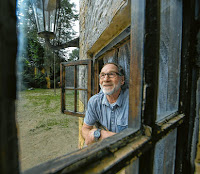 More or less he grew up with his parents in Potsdam, Zander first of all became a toolmaker. But: He was also a military rider, and devoted his entire leisure time to riding. Zander's hour came when DEFA in Babelsberg was urgently asked for a historic Western "horse trooper" and other stuntmen for the short-term.

This was his start into a great career, because the young toolmaker quickly became so far that he was allowed to develop entire productions with horses. Zander earned good money - very good, "on average I made four films a year." Soon he had his own riding stable, his horses were available for the DEFA productions. "Armin Mueller-Stahl, for example, learned to ride with me," says Zander, who also made films with other GDR greats such as Manfred Krug.

Wilfried Zander’s reputation grew quite well and he received more and more tasks, which also led him "into the socialist foreign countries". But from early on he was not on a line with the regime. At the end of the sixties, he tried to flee to the West via the sewage system: "But they arrested me." For six months, Zander was in jail, "but they released me because of overfilling." He made an application for leave, was finally allowed to leave the GDR in 1976 and went directly to Schleswig-Holstein, "because this is horse-rearing land, besides, a cousin of mine worked in Schlutup."

The transition to the Karl-May-Games and the NDR was almost seamless. Zander did stunts for "Big City", "Derrick", "Der Alte" and other productions, he took over the action scenes as a villain or evil Indian on the Kalkberg. Also in the "Schwarzwaldklinik", with his old GDR stunt buddy Peter Hick, since 1993 he’s been the director of the Störtebeker Festspiele Ralswiek, Zander participated. "We always matched the injured patients."

In his dangerous job, he enjoyed the most "preparing for the task so that the stunt is safe." Looking back, he says, "I'm glad I came through it well."

In 36 years of stunt activity, he was only injured twice - once on the arm, once on the leg. Zander finished stunt work twelve years ago.

He had long since taken over the Freilichtbühne. "I felt like doing theater myself," he says. And since the Freilichtbühne was closed down in 1990, he rented it from the city. There was much to do. "But I've rolled up my sleeves and kicked off." He'd spent a lot of money back then, "money I would not have had without my stunts." His first season in 1991, he can still remember: "We had the play 'Räuber Hotzenplotz'."

Wilfried Zander would not be Wilfried Zander, if he did not make almost everything himself in the Wallanlagen. Above all, he is permanently active in setting up the scenery, since his craft skills benefit him. However, he has support: "My wife Beate and my daughter Marie have my back," he says.

The Freilichtbühne has become its second home. The most fun he has had, "when the families are happy". What Zander wants: "That the Lübeck also discovers what a beautiful open-air stage we have here."