Joshy Peters is back and forth as he studied the old photos of himself on the table. Hans-Werner Baurycza has published his pictures in the Antiquariat Berghalle. An acting life at Kalkberg - 30 years. Battle scenes, rutting scenes, love scenes. As Old Shatterhand, as Great Bear, or as Old Surehand, as the Oil Prince or a Mining Owner.

Bad Segeberg, He has mastered every role, and therefore his popularity with the audience has always been brought him back to Kalkberg. Now he plays Old Wabble at the Karl-May-Games. "It's clear" is its slogan. "It's clear" is also called out when he passes the spectators. "We really get the hang of it," Joshy Peters, like the entire ensemble, is proud of their success. His role of the shaggy Old Wabble, a shady cowboy, who likes to kill Indians, is complex and exciting. "The empathy of the audience for the villain is sometimes greater than for the good," he says, smiling. Villains lie within him. As unscrupulous Roulin in the "Valley of Death", 1993 as the oil prince. And in the 30th anniversary year, he plays Old Wabble, who first shoots and then thinks, on the side of General Douglas, interpreted by Mathieu Carriere as an ice-cold gentleman. 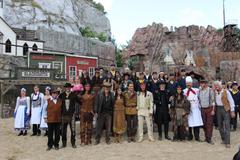 In 1987, Joshy Peters, who was still on the good side of Winnetou performer Klaus-Hagen Latwesen. In the following year, Pierre Brice had to give up his role. "This first year was not very pleasing," remembers Peters. The prospect of Pierre Brice by replaced by Latent had overcrowded his playing time. Joshy Peters: "I felt like I was in a psychodrama." There was a brief meeting with Brice. But the age difference was too great, as at that time the still young Old Shatterhand was to play on the side of the Winnetou veteran. Joshy Peters recalls his role as Great Wolf on the side of Gojko Mitic ("Schatz im Silbersee"), who played Winnetou from 1992 to 2006. He was even allowed to interpret historical sentences by Sitting Bull, the wise chief  and leader of the Sioux. 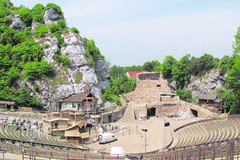 There were great scenes. A leading Indian role. "He is a fan of the Indian culture, ancient wisdom that has long been overtaken and forgotten. "1992 was the most beautiful year for me. We rode like crazy. "He had won a friend with the Segeberger Winnetou Gojko Mitic. "A loving person who had an ear for everyone and never played in the foreground." He shared a home with him for a season and they cooked together. The ensemble was also a good troupe. "We had a lot of fun, despite the often very bad weather, there were no mimosas."

Bad Segeberg had become his second home. In front of an estimated five million spectators, he has ridden here. Even after 30 years, the fit 59-year-old, despite parallel running television roles (among other things with "North at Northwest") does not stop. He could play Old Shatterhand, his favorite role again. "I'll be 60 in September" But with a sporting hardness test one attested to the fitness of a 40-year-old.

And now he becomes father. With his future wife Daniela Wichmann, the actor, who was already the father of twins in 2008, expects a son in October. "Deadline is October 12th," Joshy Peters stated. "The twins are looking forward to their brother. It is a great happiness. "

An actor to touch. "I think it's great when people recognize me in the street." Meanwhile, Bad Segeberg had such a great value, "that the people at home in Hamburg-Eppendorf would also chat with me." And then, he was still grinning, an article of the year from the Bilderstapel. "Old Shatterhand sent three robbers into the flight" titled a tabloid in 1988. "They were drunk and wanted my money." When one of the bandits with the knife injured him, he hit the attackers with his fists and they took off into flight. Old Shatterhand has learned his craft. Today he would give them "It's clear".