Who Are Those Composer? ~ Carmelo A. Bernaola 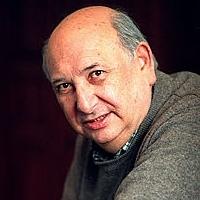 Carmelo Alonso Bernaola was born in Ochandiano, Biscaye, Spain on July 16, 1929.  His father was Amado Alonso and his mother was Rufina Bernaola. He later chose to use his mother's surname, rather than his father's. When he was 7 years old, he and his family moved to Medina de Pomar (Burgos), where he received his first musical education. In 1943 he moved to the city of Burgos, where he studied with professor Blanco and he also played the clarinet with the local Engineers Academy Band.

In Italy he studied composition with Goffredo Petrassi in the Accademia Nazionale di Santa Cecilia and conducting with Sergiu Celibidache in the Accademia Chigiana di Siena. In addition, during this period he participated in the Darmstadt International Summer Courses under the direction of Bruno Maderna and Olivier Messiaen and there he met Pierre Boulez, Karlheinz Stockhausen, Luigi Nono and Ramón Barce. In Spain, he completed his studies with André Jolivet and Alexander Tansman in Santiago de Compostela.

In 1962 he returned to Madrid, where he was harmony teacher at the Madrid Conservatory and clarinet player with the City Band. He was also a scholar at Valladolid University.

From 1981 until his retirement he was the director of the Conservatory of Vitoria-Gasteiz. He died in Madrid, Spain on June 5, 2002, at the age of 72.