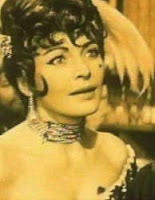 After nearly three years in an Alzheimer's Center, where she gradually lost contact with the world, Czech actress Květa Fialová has died at 88. Květa was perceived as a sex symbol during her early career and was considered one of the most beautiful Czech actresses – The Czech Elizabeth Taylor. Thanks to her fierceness she was destined for the roles of strong willed women who became her acting staple for a long time. When she became older she changed her acting style from sexy women to mature, elegant ladies, mothers and grandmothers. Such as the Countess Thun in the parody “Adela Did Not Sleep” (1977), Bob's mother in “Summer With The Cowboy” (1976), Mommy Samkova in “Half a House Without a Groom” (1980) or grandmother in a comedy of the century “I Enjoy the World With You” (1983). Květa appeared in two Euro-westerns: Lemonade Joe as Tornado Llou “The Arizona Warbler” in 1964 and the 1992 TV film Be Quiet Horse.
Posted by Tom B. at 7:40 AM