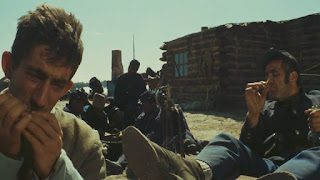 When they were shooting the film around Burgos it became an event for all the townspeople. Posters were posted in all the shops in the area looking for extras that might know how to play instruments. There appeared Domingo Contreras. Today he is 71 years old and is the village priest. Back then he was a twentysomething seminarian who played harmonica. "I showed up to audition when they asked for musicians There were three people: Two fat guys and  myself, both of them played better than me, but the casting director dismissed them quickly. The boys were angry because they were very good musicians, but the director told them they needed someone to participate in a scene from a prison camp, and that in those places the people were not fat, but famished as I looked. So they hired me. "
.
He shared filming experiences with one of the greatest of the Spaghetti westerns, and along with other musicians played a melody that to this day is still remembered by all who see the movie.