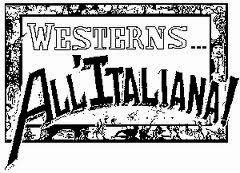 Sometime early in 1983 Tim Ferrante got the bright idea of forming an Italian Western fanzine. He called his buddy Gary Dorst and Gary (unfortunately Tim says) liked the idea. Soon Bob Bahn, Don Trunick and Bill Boehlke joined in and later Bob Hiott, and through their collective efforts Westerns… All’Italiana! was born. Tim told me the first issue went out in April of 1983 after putting the issue together with the other guys supplying articles, pressbook material and support.

The first issue was 24 single type-written pages. This was long before computer, fax machines and e-mail. Tim had to collect material from various sources like Variety, the Hollywood Reporter, and other film magazines. Hours were spent researching and collecting material at the local library and book stores looking for information on a genre most American film goers were unfamiliar with to say the least. Even when material was located or written up by one of the contributors it had to be mailed to Tim and then he had to re-type the submittal so all the printing looked the same. Pictures were cut and pasted to each page. After assembly Tim would take the original copy to work (ABC Television) and photocopy 50 issues. He then had to collate and staple them individually and then mail them out.


I became aware of the fanzine through Gary Dorst after Tim had released the second issue. I talked with him on the phone and he told me he could sell me a Xerox copied issue #1, as all the original 50 had been sold. He told me one of the readers had bought several copies of issue #2 and sold them to Larry Edmunds Book Store on Hollywood Blvd. but he had no idea if there were any left. I drove to Edmunds the following day since it was in the territory I covered as a Territory Mgr. for Hubbell Inc. Larry had three copies left at $2.50 each. I bought all three keeping two and sending one to my brother.

I kept bugging Tim on when would issue #3 would be available. He said he had all the material to do two more issues but it all had to be retyped, set up and assembled and he really didn’t have the time to do it at the moment. I told him forget about retyping the articles just assemble what he had and get it out. So he did just that and released issue 3/ 4. At this point he was about to let the fanzine fold. I talked him into letting me help him and we could do a 25 page issue every month alternating issues so we would have two months to complete an issue. He agreed and for the next few years that is how the issues were done. We each bought Brother word processors and were able to exchange discs which helped speed up the process and allow the printing style to be compatible.

When Tim decided to get married I took over the zine and decided to release them on a quarterly basis. Thanks to Eric Mache and Ally Lamaj of the future Wild East Productions they helped secure and conduct interviews with several of the major actors of the genre such as Tomas Milian, Gianni Garko, Hunt Powers and Franco Nero. I along with Bill Connolly of Spaghetti Cinema was able to locate some West Coast participants such as Robert Woods, Walter Barnes, Richard Harrison, Keno Henderson, Neil Summers and Dominic Barto. Since Eric is a graphic artist by trade we put him to good use drawing some splendid covers and issued special issues covering their careers. We also started doing Memorial Issues for the greats that were now passing on.


By the turn of the 21st Century I started making digital issues with the help of my co-editor Lee Broughton. I could put an issue together in about a week or two e-mail it to Lee who would tweak it add page numbers headings and other bells and whistles and then return it to me to mail out to subscribers. This still didn’t answer the demand for immediate correspondence with fans on new CD, DVD releases, passing of actors and crew members and information on the now infrequent film start up. Back issues had always been available, but a real chore to copy each one. Luckily I met Phil Dovaston of Cleveland, England who took over the chore of selling an copying issues for European fans.


In 2010 I decided to create a Westerns… All’Italiana! blog and now a weekly Facebook page. Today you can get your daily fix on everything related to the Euro-western genre just by logging on to your computer and going to the blog.


How amazing is it that a genre scorned by American filmmakers and film critics has been a staple of my life for 30 years now. I’ve met lifelong friends like Tim and his wife Jackie, Eric and Ally, Spaghetti greats like Ennio Morricone, Robert Woods, Richard Harrison, Gordon Mitchell, Mickey Hargitay, Brett Halsey, Mark Damon, Hunt Powers, Dan van Husen among others. I’ve made friends from around the world, been to Almeria, Spain twice to visit the Leone sites and Monument Valley thanks to my friend the late Don Bruce. I have been in contact with so many fans of the genre many of which I call good friends. Gary Dorst and Rich Landwehr, who created the famous WAI! logo, passed away in the last year and are not here to celebrate the 30th anniversary with Tim and myself but they will always be fondly remembered.


HAPPY BELATED 30th BIRTHDAY WESTERNS…. ALL’ITALIANA! Thanks for the memories and the adventures that still lie ahead.