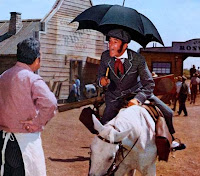 His taste in music and his British accent won him much sympathy: Chris Howland aka "Mr. Pumpernickel" was one of the most popular radio and TV presenters in Germany. Now he has died at the age of 85.

Hamburg / Cologne - He was the most famous Englishman on German television: The actor, presenter and entertainer Chris Howland has dead This was confirmed by a spokesman for the West German Radio (WDR) in Cologne. Howland died at the age of 85 years at his home in Rösrath near Cologne on November 30, 2013.

Howland was born in London, England on July 30, 1928 and came to Germany in 1946 as a gunner into occupied Germany. After the war he worked as a radio announcer for the British Army. Soon he had a large following among the German population. Soon he got his own show at the former North West German Broadcasting NWDR. He was given the nickname "Mr. Pumpernickel". His German audience called him
"Heinrich Pumpernickel".

Howland became famous as the host of "Musik aus Studio B", and especially with his TV show "Vorsicht Camera". In 1959 he moved back in his home country for two years. There, however, he never achieved the fame he had in Germany.

Howland was mostly cast as a quirky supporting or character actor  and appeared in many films, including Karl May movies and in the Edgar Wallace series. Most recently he was seen in the movie parody "Neues vom Wixxer". Chris appeared in three Euro-westerns: "Apache Gold" (1963) as Lord Jefferson Tuff Tuff, "Legacy of the Incas" (1965) as Don Parmesan and "Blood at Sundown" (1966) as Doodle Kramer.
Posted by Tom B. at 7:50 AM