This man of 70 years with his brother Juan, now retired, are the people who know every corner of the province where most of cinema films were made.

If anyone knows, like the back of his hand, every corner where movies were filmed in Almeria, are Diego Fernández and  his brother Juan. Both taxi drivers were for many years the best in their business in the golden age of cinema to the most important actors in film history, as well as directors and assistant directors.

Diego Fernandez remembers his father Diego," A pioneer among Almeria taxi drivers in the world of cinema." "At the time, remembers Diego, I worked in the film colony, but as the film business looked like it could be a good deal for us, we decided to help my father.”

Diego with his brother Juan have been the drivers of film actors in Almería, who kept great memories of those years. "The first film in which I worked for as a taxi driver was Tierra Brutal, although my father had worked in “Eye for an Eye ".

He still remembers the first car he bought. "Right after the military, I got my first driver’s license and bought a car Fiao, specifically a 1400, and started making money on the film “Tierra brutal”. Among the curiosities remembered by Diego Fernandez, is the fact that three actresses celebrated their honeymoon in the land of Almeria. 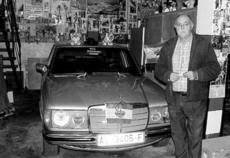 "The first was Paquita Rico who married Alfonso Ordóñez El Niño de la Palma and then came to work at Almeria on a film. I drove them in my taxi. Remembering the other two honeymoons there was Carmen Cervera who was accompanied her husband, Lex Barker, famous for his Tarzan movies. Conchita Márquez Piquer who married Ramiro Oliveros in Almería while still appearing in a movie," says Diego Fernandez.

Although the Fernandez brothers have lived through a lot of film shots, they were always working, Diego is 70 now and is very clear that "We were grateful to have been involved in the shooting of so many very interesting and spectacular films, but the most important may have been “Lawrence of Arabia”. Which should not detract from films like “Patton”, “The Three Musketeers”, “Indiana Jones and the Last Crusade” and “Sandokan”, where taxi drivers work up to 17 hours". 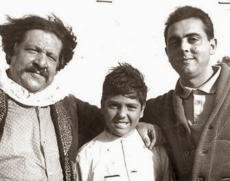 Diego Fernandez in “Lawrence of Arabia” then drove Omar Sharif to the shooting locations, "until I brought a Chevrolet in Madrid" he recalls. Although this driver, who made ​​great friends in the film industry is very clear that "What made ​​a lot of money in Almería and gave a lot of work to him and his brother were the spaghetti westerns of Sergio Leone. Diego and Juan Fernández Muñoz became so important for directors and producers coming to Almeria and were the drivers who took them to the film locations." We knew the province like the palms of our hands, and when a manager came to Almeria, the first thing he did was contact us, we told us what he wanted and we took him to that kind of place. It was a way for them to support the cinema then, as now, without the residence support made the film industry move to Alicante or Coin.

For Fernandez, the best art director in the world is Gil Parrondo. "He was a person who decided to film in Almería and brought to this land many films. He always wanted to work in Cabo de Gato, Almeria. He really loved this land."