A TALENT FOR LOVING 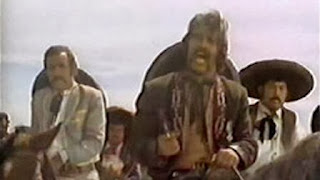 Set in Texas and northern Mexico in the decades around 1865, its basic premise is a fantastic one: In the 16th century an Aztec priest has cut off his own hand and used the bloody stump to lay a curse upon a blasphemous Spanish conquistador and all his direct descendants. The curse: that once any of the descendants, whether male or female, have tasted physical love, even in the form of a single kiss, they will spend the rest of their lives as being nearly sexually insatiable. Three centuries later the beautiful young virginal daughter of a fabulously wealthy Texas rancher and gambler is latest the victim of the curse; an elaborate set of contests and races is arranged to choose which of two cowboys will win her hand in marriage.
Posted by Tom B. at 7:31 AM