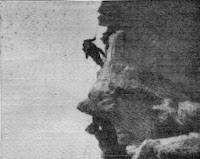 John Walker, a prominent jeweler, is awakened one night by a noise that seems to come from his strong room.  On examination, he finds that the door of the large safe is open and that the watchman is asleep.  His clerk and he make an inventory of the jewels and find that none are missing.  Next morning, however, it is discovered that imitation jewels have been substituted in every display case.
The robbery is the talk of the city and of the Merchants' Club.  Arizona Bill, a friend of Walker, is present at the club and is invited by his host to the theater, where a celebrated dancer, Vesta, is all the rage.  After the performance, Walker and his friend call on the dancer in her dressing-room, where she is presented with a valuable necklace by the merchant.  Vesta is attracted to Bill, who looks over his gloves when the visitors leave the room.
Soon after their departure Vesta admits she is a member of the jewel thieves' gang, to whom she hands over the necklace. While they are engaged in conversation, Bill returns for his gloves and awaits an answer to his knock.  Being detained, he looks through the keyhole and sees a strange visitor talking to Vesta.  When he is admitted the stranger has disappeared, having made his exit through the only window in the room.  Bill's suspicions connect Vesta with the thieves, and at the club the next evening he makes a bet of $5,000 with Walker that he will discover capture the thieves within a month.
Next day he follows Vesta to the wonderful subterranean city where the thieves have their workshops.  He succeeds in entering after many perilous escapes and is discovered by the gang.  To his surprise, he finds that several prominent members of the Merchants' Club are leaders of the gang.  These men give orders for the murder of Bill, and he is saved just in time by Vesta's intervention and quick wittedness.
Vesta, being unable to extricate Bill from prison, rushes to the city and discloses the secret to Walker, who is skeptical of the whole story.  They are interrupted by the entrance of the leader of the gang, whose villainy is unknown to Walker.  This man, when alone with Vesta, charges her with being a traitor, and, at pistol point, he forces her to the underground city where she is thrown into the same abyss into which Bill had been cast a few hours before.
The two prisoners make their escape after many perils, and Bill tells the chief of police the facts, with the result that the jewel thieves are all arrested.
﻿