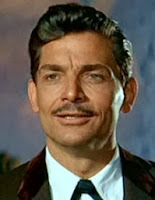 Film and TV actor Larry Pennell died on August 28, 2013, place unknown. Born LawrenceKenneth Pennell on February 2, 1928 in Uniontown, Pennsylvania. Before becoming an actor he was a professional baseball player for the Boston Braves [1948-1953]. He then drifted into acting appearing in several films before he was given the lead in the 1961-1963 TV series ‘Ripcord’ about skydivers. He made his most lasting impression on the TV series, ‘The Beverly Hillbillies” as Elly May’s boyfriend Dash Riprock. His career continued with small parts in films and television including “Mr. Baseball” (1992) with Tom Selleck. His last film appearance was in “The Passing” (2011). Larry appeared in one Euro-western "Flaming Frontier" (1965) as General Jack O’Neal.
Posted by Tom B. at 11:11 AM