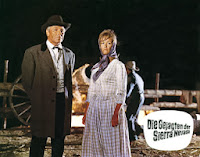 Richard Häußler was born on October 26, 1908 in Munich, Bavaria, Germany. After acting lessons in Munich, he made ​​his debut in 1926 in Nuremberg. He then acted not only at the Munich Kammerspielen, but also in Stettin, Hamburg and at the Deutsches Theater in Berlin. From 1935 to 1938 he was part of the ensemble at the Schauspielhaus in Munich.

In 1935, he made ​​his film debut, where he participated in minor and sometimes major roles in films of all genres. Haussler usually played cultured men, whether as lovers or superiors as foresters, doctors or lawyers or as a crime boss in the Edgar Wallace film “Zimmer 13”. He also directed several films. Häußler appeared in only one Euro-western “$5,000 on One Ace” (1964) as Attorney Dundee.

Häußler, who continued to act until the end of his life at various theater stages in Germany, was married to the actress Maria Andergast [1912-1995] from 1958 until his death on September 28, 1964

Today we remember Richard Häußler on what would have been his 105th birthday.