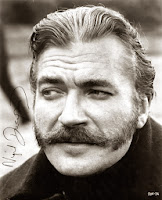 British stage, film and television actor Nigel Davenport died in England on October 25th. He was 85. He was born Arthur Nigel Davenport on May 23, 1928 in Shelford, Cambridgeshire, England, U.K. Davenport first appeared on stage at the Savoy Theatre and then with the Shakespeare Memorial Company, before joining the English Stage Company at the Royal Court Theatre in the 1960s and was a founding member of the English Stage Company. He began appearing in British film and television productions in supporting roles, including a walk-on in Tony Richardson's film, “Look Back in Anger” (1959). Subsequent roles included a theatre manager opposite Laurence Olivier in the film version of “The Entertainer” and a policeman in Michael Powell's “Peeping Tom” (both 1960). Davenport retired from acting at the turn of the 21st century when he could no longer memorize lines from scripts. Nigel appeared in two Euro-westerns “Charley One-Eye” in 1972 as the bounty hunter and later in 1997 in “The Return of El Coyote” as Félix de Echagüe. Married twice he leaves three children Hugo a journalist, actress Laura Davenport with his first wife, Helena, and the actor Jack Davenport with his second, Maria Aitken.
Posted by Tom B. at 12:49 PM