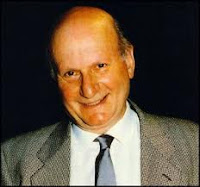 Gerry Anderson, creator of the Thunderbirds, Joe 90 puppet superhero and the western Four Feather Falls TV shows, has died at the age of 83, his son has announced.

Anderson had been suffering from Alzheimer's Disease since early 2010, and his condition had worsened in the past six months, Jamie Anderson said.

Jamie Anderson announced the news on his website, saying his father had died peacefully in his sleep at noon on Wednesday.

"Gerry was diagnosed with mixed dementia two years ago and his condition worsened quite dramatically over the past six months. Having already decided with his family on a care home for himself earlier this year, he moved in there in October," Jamie Anderson said.

His other creations included UFO, Space: 1999, Supercar and Fireball XL5.

Anderson, who lived in Henley-on-Thames, Oxfordshire, began his career studying fibrous plastering, but had to give it up when it gave him dermatitis.

Speaking in January 2011, Gerry Anderson said he felt "humbled" by his success
After a spell in photographic portrait work, a job in Gainsborough films and time spent in air traffic control, he set up AP Films with some friends.