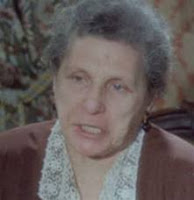 Ester Girgenti was born in Naples, Italy on December 23, 1907. She is the mother of the actress Sara Franchetti [1946- ]. As Rina Franchetti  she debuted on the stage in the company of Luigi Pirandello, then worked alongside Lamberto Picasso. Her cinema career began in 1932 co-starring in the comedy “Due cuori felici”, by Baldassarre Negroni. Initially her work on the big screen was very fragmentary. She returned as a more constant presence in the postwar years, appearing in very popular films such as “La provincial” (1953), directed by Mario Soldati and “La dolce vita” (1960) directed by Federico Fellini, in a secondary role. Rina appeared in two Euro-westerns: “The Brute and the Beast” (1966) as Mercedes and “Two Pistols for a Coward” (1968). Rina also worked as a TV actress under contract to RAI. She appeared in several soap operas and television series, including, in 1955, “Little Women”, directed by Anton Giulio Majano, in 1962 “Il caso Maurizius” and “Resurrezione” in 1965, directed by Franco Enriquez, in 1967, “La fiera della vanità,” directed again by Majano. In the second half of the 1970s her film career went rapidly downhill. Having a melodic voice she then found work as a voice actress and was frequently engaged in radio plays on EIAR and RAI. In 1985 Rina took part in the radio variety show ‘Tears’ on Radio 1 as the grandmother which was directed by Diego Cugia, who was also author and presenter of the program together with Massimo Catalano. Franchetti remained active until her death at the age of 102. For her longevity she has been called the grandmother of Italian cinema. Today we remember Rina Franchetti on what would have been her 105th birthday.