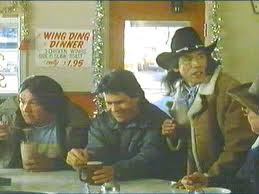 For the Northern Cheyenne tribe of Lame Deer, Montana, the American Dream has taken a grim detour. Buddy Red Bow, a quick-tempered activist, is battling greedy developers who send fast-talking, slick Sandy Youngblood to the reservation to try to persuade the council to vote in favor of a strip-mining contract. Philbert Bono is a serene hulk of a man guided by sacred visions. He desperately wants to find his medicine, tokens from the spirits, and starts his journey to become a warrior by trading some marijuana, booze, and a few bucks for his 'war pony' – a rusted out, beat up 1964 Buick Wildcat he names 'Protector.' Meanwhile, Buddy's estranged sister, Bonnie, is arrested in Santa Fe, New Mexico and Buddy is the only family member who can help her and her children, Jane and Sky Red Bow. Buddy does not own a car, so he is forced to make the journey with Philbert. They set out on their road trip, and Philbert's easygoing ways and insistence on frequent stops to pray and eat prove irritating at first to Buddy, but the men reach an understanding as the trip wears on. When they finally reach Santa Fe, they meet up with Bonnie's friend, Rabbit who is also trying to get Bonnie out of jail. Buddy and Philbert end up taking more than just a trip from Lame Deer to Santa Fe, finding themselves on a journey with many unexpected twists, turns, and stops. Together, they face the realities and dreams of being Cheyenne in the modern-day United States as they travel down the Powwow Highway.