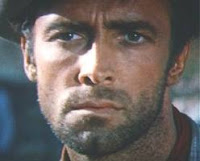 Thomas Hunter was born, in Savannah, Georgia, on December 19, 1932. Thomas was trained as an actor in New York by Uta Hagen and Wynn Handman. He appeared in many TV commercials and was a model for the Ford Agency. With the help of singer Johnny Mercer he got a role as a GI in “What Did You Do in the War Daddy?” (1963). One day he went to see his agent and hadn’t shaved for a few days and was wearing a sheepskin jacket. In the hallway he accidentally   bumped into a short well-dressed man knocking him down. Later he found out the man was Dino de Laurentis and asked him to appear in a western he was making called “The Hills Run Red”.   Hunter would go in to appear in over 20 films and TV appearances in such movies as “Liebesnächte in der Taiga” (1967) “El Magnífico Tony Carrera” (1968), “X312 - Flug zur Hölle” (1971), and “Liebesnächte in der Taiga” (1967). Moving to Rome in the mid-1960’s he appeared in 3 Euro-westerns: “Death Walks in Laredo” and “The Hills Run Red” (both 1966) and the made for TV western “Carlos” (1971) filmed in Algeria. Hunter founded a theater group in Rome which would put on plays in the basement of St. Paul’s Church. On his return to the U.S. he turned his talents to stage plays and writing including The Final Countdown, released in 1980. Today Hunter makes his home in Rhode Island where he continues to write. Today we celebrate Thomas Hunter’s 80th birthday.