Who Are Those Singers & Musicians ~ Italo Cammarota 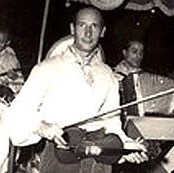 Italo Cammarota was born in Benevento, Campania, Italy in 1909 into a family of musicians: his father, Ermanno, was a double bass player, his brothers, Ivano and Ermanno (like their father) were well-known guitarists, and the other brothers also worked in the musical world. He began to study the violin, but soon moved on to other instruments, such as the piano, accordion, sax, and even the ocarina (or arghilophone), which many years later allowed him to play on some Western movie soundtracks. While still a student, he started working as a music composer for silent movies. After earning a diploma in violin and piano at the Naples Conservatory, he married Lavinia Iasiello, a pianist, with whom he often worked. Meanwhile he formed his own orchestra, with which he began to perform in many varieties of the time, while continuing to work in film; After the war, the orchestra took the name ‘Hula Hula’, (on the accordion Raffaele Russo, on the guitars Ninì and Silvano Pagliuca on the drums Raffaele D'Elia, on the saxophone Silvio Sorgente, voices Benedetto Politi and Tonino Sorgente) which became very successful doing live performances where it performed the classics of the day such as Munastero and Santa Chiara on Anema together. Italo wrote many songs. After wining a music competition, he moved to Rome as first violinist for the Rai Orchestra where he participated in many broadcasts of the time and playing with such composers as Bruno Canfora and Franco Pisano.

In the sixties he met Ennio Morricone, with whom he collaborated on various Western soundtracks, playing the ocarina. And it was always with this instrument that he also participated in various recordings: in Fabrizio de André's “No Money No Love No Heaven”, for example, his ocarina can be heard in the introduction and in the interludes of the song “The Song Il Giudice”. He continued his activity throughout the 1970s, becoming an arranger for the Yep label and working on recordings for Yep artists such as Santo California playing the ocarina.

Italo Cammarota died in Rome sometime in 1980. He was 71 years old.