In Italian (the time counter is burned in, and is meaningless, as it actually doesn't count the running time).

Softcore, except for the last minute or so with soft X footage added in (no hardcore).

The sole male nudnik is supposed to be Laurence Bien, the German actor, cavorting with an unknown female.

No faces, only naughty parts glimpsed. This stronger footage doesn't match the rest of the film's earlier atmosphere. Which is usually the case.

The original film probably only had female breasts and male buttock nudity on view.

The boys (Bien, Capitani & Rudy) get to ogle the ladies throughout, without touching...

Wisely, Mr. Mitchell didn't make himself available and was away playing with his tractor.

Cast also includes Rick Boyd & Michele Branca, both previously not listed elsewhere, appearing in thankless roles. Both manage to keep their pants on.

New [?] footage includes female full-frontal(s), that may have been added in [?], or maybe not.

Looks like a western version of a Decameron movie.

Interestingly, most of the present cast partook in that short-lived genre of the early Seventies.

Runs exactly 70m, give or take a second.

Gordon Mitchell appears twice towards the end [as the Bride's father?], and has no dialogue.

He may, or may not have spoken in his second scene (the wedding reception), buts goes un-micc'd.

Looks like it was shot around 1973 [?], following Miles Deem's Here Comes Trinty to Eldorado (November 1972, that had Mitchell in the cast), butt, does feature some of that films' extras (puns intended). The insert(s) were (probably) added in around 1977-79, as Italian censorship eased up, and the film needed some visual oomph.

Soundtrack and musical score take full advantage of the surroundings and includes lots of fart-like sounds trumpeting the action.

The film was still playing Italo cinemas as late as Summer of 1982, but whether it had even more graphic scenes added to it is unknown. 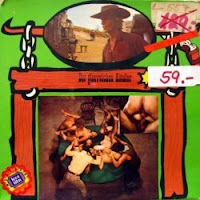