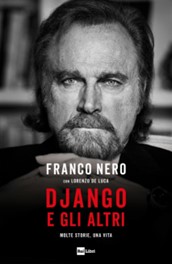 Django e gli altri (Django and the Others)

'Django e gli altri' (Django and the Others) , by Franco Nero, published by Rai Libri , is on sale in bookstores and digital stores.

The actor is an icon of Italian and international cinema. He has worked in around 250 films in over 30 countries, playing the most diverse roles. Django is the character with whom he is certainly recognized in the world, but Nero is not just Django: in his sixty-year career, his face has told an infinite number of stories and psychologies, and in this book, in an ideal dialogue with his most famous character, the great actor, retraces his life, full of professional and private events that tell the golden years of cinema and the transition from the end of the twentieth century to the beginning of the third millennium.

Films with John Huston, Buñuel, Fassbinder, Chabrol, Zeffirelli, Pupi Avati, Tarantino in his homage to the character of Django, and many other international directors, meetings with the most famous personalities from all over the world, such as Marlon Brando and Paul Newman, chats with Lawrence Olivier and above all his relationship with his lifelong partner, Vanessa Redgrave: this is Nero's story of a golden age of cinema in his big and small set stories, of his private events, but above all of his determination of a man who has never spared himself in the face of the professional and personal challenges that life has put before him.