Today we begin a new search for film locations for “The Mercenary” a 1968 revolutionary western film directed by Sergio Sollima and starring Franco Nero, Tony Musante and Giovanna Ralli. The story centers around a greedy Polish mercenary who aids a mine worker and peasant girl as they lead a revolution against an oppressive Mexican general while being pursued by an American rival.

The film opens in Mexican bullring where a group of clowns, one dressed as a rejoneador (a matador on horseback) (Tony Musante) and riding a fake horse, enter the ring and the matador fights a steer with a rubber tipped spear. In the crowd sits a gringo who the clown recognizes and grows uneasy by his presence. The gringo, Sergei Kowalski (Franco Nero), begins a narration on the how the two met and the basis of their relationship.

This scene was filmed in Las Ventas, Madrid bullring in the Plaza de Toros Madrid, Spain. 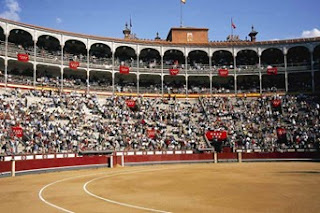