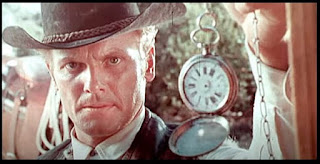 He was discovered in Los Angeles, cleaning a barn, by Dick Clayton, a budding actor and agent (sometime later he would manage James Dean, Jane Fonda and Burt Reynolds). It is the incredible story of Tab Hunter, one of the great stars of the western.

Unforgettable his performance in "The Burning Hills" in 1956, Tab Hunter stood out in leading roles in several gunslingers films. We remember "Gunman’s Walk" of 1958 and "The Life and Times of Judge Roy Bean", another western masterpiece, of 1972.

We find him in “Gun Belt”, “Hostile Guns” and in “They Came to Cordura”, with other great Hollywood stars.

In 1968 he set foot in Italy to work on a film by director Roberto Mauri, “La vendetta è il mio perdono” (Shotgun). It was the heyday of spaghetti westerns and Tab Hunter followed in the footsteps left by other American actors and flew to Rome. He took on the role of a ruthless ex-sheriff named Durango who puts his gun back on to avenge the killing of his woman. Voiced by Giancarlo Maestri, with Italian actors Erika Blanc, Piero Lulli, Mimmo Palmara, Dada Gallotti, Daniele Vargas and Renato Romano, he gave life to a dirty and raw western that left some scenes well etched in the memory of fans, a true shooter that satisfied the audience, minus the critics, but everyone applauded Hunter's interpretation, fully immersed in the canons of spaghetti.

His gunslinger is a prince of revenge, nihilistic, relentless and uncompromising, merciless, ready to silence any other emotion to achieve his goal, to kill. It was his only participation in an Italian western and it is worth enjoying.