We continue our search for film locations for “The Mercenary”. The scene shifts from the peons eating their noon time meal to the mine owner and a group of business on a patio enjoying their meal which is consists of soup, roast pig and wine. Suddenly a pistol pops out of the pigs mouth and behind the platter serving the meal is Paco holding the gun. He throws the pig and platter to the hungry miners and tells the mine owner Alfonso Garcia (Eduardo Fajardo) that he was told they feed the bosses and the peons just the same. He tells Garcia he has brought him some of their lunch and forces him to eat the dead lizard.

This scene was filmed at Cortijo Blanco, Campello Spain. 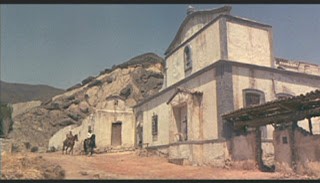