Who Are Those Gals? ~ Liliana Chiari 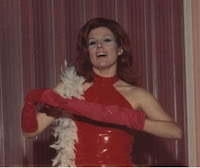 Born in Brenzone (Verona), Liliana Chiari attends her educational and theatrical studies in Milan, the city where she lives and works in the field of journalism and public relations. As an actress she acts alongside some of the biggest names in show business (Carlo Dapporto, Erminio Macario, Nino Taranto, Tino Buazzelli, Tino Scotti, Piero Mazzarella, Sandro Massimini, Gigi Proietti and Federico Fellini) and for four consecutive seasons travels with the Italian company of Operette. As a writer, she writes several theatrical book of classical texts. She is currently living in Bari, Italy working as a journalist for health and wellness sections of several national magazines.