The Whore, the Killer, the Revengeful and the Tramp (Part 2)

The Whore, the Killer, the Revenger and the Tramp
50 Years ago in the West

Track by Track Analysis
After  the  long  credits  sequence  with  no music,  showing  three  men  waiting  for  a train that appears to not bring what they had expected, a moaning harmonica reveals that the   men’s   wait   has   not   been   in   vain: somebody  did  step  out  of  the  train  and  is now insidiously calling them to face him. The man Harmonica kills them all and is injured. The music   heard   is L’uomo,   a   slow   but disquieting   prefiguration   of   the L’uomo dell’armonica theme, with a first apparition of Frank’s theme played by the banjo. Il grande massacro / L’uomo dell’armonica All  the  members  of  the  McBain  family, except  the  young  boy,  have  been  shot  by unseen  killers.  They now  emerge  from  the wilderness to face the kid. This impressive musical moment   will   mark   film   music history forever. Interestingly,  the  second  episode  of  the Ultimo TV series (La sfida) kicks off with a comparable scene where killers face a boy and decide to kill him in the same way and for the same reason (the boy has heard the killer’s name) 50. If the wink to West is more 50 https://www.youtube.com/watch?v=Rnv5TIN7QfY than obvious,  Morricone  however  decided to  not  play  the  game  of  self-reference  and simply illustrated the scene with a suspense cue (a variation of Quattro suoni). L’orchestraccia Jill  arrives  to  Flagstone,  where  diegetic saloon  music  is  being  played.  A  soft  piece called L’arrivo  alla  stazione is  present  on the  expanded  CD,  probably  conceived  for this scene but unused. C’era una volta il West Jill’s  theme  premieres  majestically as she realizes  there  is  no-one  to  pick  her  up  and moves her way through town to find a lift to get to Sweetwater. It is actually a shortened version of the piece C’era una volta il West, where  the  final  part  is  absent. This  is  the version  that  appeared  in  1974  on  the  LP “Soundtracks”  (RCA TBD1-1068),  lasting 2:37. L’America di Jill A  short  intro  illustrates  Jill’s  doubts  about her  husband’s  sincerity,  then  a  nice  bridgeon  a  melody  not  heard  elsewhere  makes room  to  a  new  rendition  of  Jill’s  theme  as the  carriage,  driven  by  Paolo  Stoppa  (who in spite of his short role did have his name on  the  poster,  because  he  was a known figure in Italy at the time) crosses Monument Valley

La posada/Cheyenne They stop at an inn (“posada” in Spanish), where Cheyenne makes his first appearance on an unreleased version of his theme. Armonica The  man  with  the  harmonica  is also  at  the inn, and the two men will check each other out a bit like Eastwood and Van Cleef had been  doing outdoors in  a  town  in Per qualche   dollaro   in   più.

A   version   of L’uomo  dell’armonica is  used,  but  due  to the more confined space in which the scene takes place, Morricone had to hold back his horses,  making  it  a  half - baked  rendition. This long scene adopts theatre - like manners with  overdone  short  dialogues  and  corner looks by the two men who don’t know  yet on  which  side  the  other  is,  not  willing  to lose their face especially in the presence of a woman. This scene is far from perfect in my humble opinion – then again, not every scene had to be iconic, right?

Armonica - 2 versions Harmonica  can  play,  but  Cheyenne  still wonders if he can also shoot. La posada n1 This  version  of La  posada makes  use  of Cheyenne’s theme as he challenges a man, still inside the inn. Armonica  Cheyenne  advises  Harmonica  to  watch  for the false notes. C’era una volta il West Jill  finally  arrives  at  Sweetwater,  only  to discover   that   her   new   family   has   been massacred.  An  unreleased  version  of  her theme plays as she looks at the bodies one by one, very similar to the published version, but shorter and with the bridge played softly by an English horn.

C’era una volta il - West Very  short  version  of  the  theme  as  Jill decides to stay in Sweetwater. Un letto troppo grande Short and soft version of Jill’s theme. A shot of  Cardinale  lying  on  a bed  is  strangely reminiscent  of  the  fin al  scene  from Once Upon a Time in America, where De Niro enigmatically smiles at the camera.

Jill - Another short version of Jill’s theme as she is  searching  the  house,  with  a  longer  and
very  different  intro  on  soft  strings  seguing into the theme delicately played by a celesta.

Armonica - She  hears  a  menacing  harmonica  played outside. Frank The  morning  after,  Jill  is  alone  in  her  new home.  Frank’s  theme  is  played  on  English horn,  probably  to  bring  some  variety  after so many variations of Jill’s theme.

La posada n1 - The  term  “posada”  will  be  used  for  two other   suspense   cues   even   though   the corresponding scenes do not take place in an inn at all. This one is heard when Jill opens the door only to face Cheyenne and his men who have silently arrived at her house. This is another theatrical effect of Leone: it was quite  impossible  that  all  those  men  and horses could approach the house unnoticed.

Cheyenne Short  - version  of  Cheyenne  after  he  was impressed  by  Jill’s  harsh  speech  about  not being afraid of getting raped.

Armonica / L’uomo - Inside the   barn,   Jill   now   has   to   face Harmonica. He approaches her, first giving the impression that he intends to ill-treat her, but he only means to scare her and to showhis superiority.

Suspense  -Jill  gets  water  from  the  well for  Harmonica,  as  killersare waiting  for  the  right  moment to attack. Harmonica will kill them both.

Cheyenne - Cheyenne has witnessed the scene and now knows that Harmonica can also shoot.

Armonica - Harmonica is facing Frank for the first time and  memories  from  the  past  come  to  his mind, with a flashback of an unidentifiable silhouette in the wilderness.

La posada n3 - Frank  made  Harmonica a    prisoner    and    kills Wobbles because he had been followed.

A Station  - Jill understands that McBain actually intended to build a station. The  music, unreleased and not making use of a specific theme,  segues  into  a  suspense  cue  until
Frank appears in side Jill’s house.

Morton - In a strange twist of the screenplay, Frank is now back with his men and has harsh words towards  Morton,  whose  theme  appears  forthe first time as he falls on the ground. On the CD, the piece is a collage of the several short cues that will be heard throughout the movie. It  is  quite  amazing  that  such  a brilliant  piece  of  music  had  never  been released until 1999. In una stanza con poca luce.

Frank - Frank  is  abusing  an  ambiguously  semi-consenting  Jill  on  a  suspended  bed,  in  an
undetermined   place   (not   her   house   as Cheyenne  and  Harmonica  are  waiting  for her there). He reveals he killed her husband and convinces her to sell her property. This was  the  first  scene  shot  by  Leone,  and Cardinale  often  recalls  that  Fonda’s  wife was attending the shooting, making her very uncomfortable.

Morton - Morton dreams of the Pacific ocean. He will then  convince  Frank’s  men  to  go and kill their own boss

Cheyenne - 2 versions At    the    auction    for    McBain’s    house, conducted  by  Keenan  Wynn  and  with  an uncredited  Fabio  Testi  in  one  of  his  very first roles, Harmonica makes the final bid in the  form  of  the  reward  for  the  prisoner  he delivers: Cheyenne, whose theme is shortly heard. Yet another unreleased version of it is heard as Cheyenne is being escorted to jail.

L’uomo - Frank and Harmonica face each other in the deserted saloon.

L’attentato - Frank has been ambushed by his own men but Harmonica helps him get out uninjured. The    minimalistic    suspense    music    for percussion, piano and organ is actually
made  up  of  a  set  of  short  cues,  some  of which are unreleased.

Cheyenne - As the railway construction nears McBain’s property,  and  as  Harmonica  seems  to  be waiting for someone, Cheyenne arrives and asks Jill to make coffee. Come una sentenza film version Frank   arrives   to   face   Harmonica.   The trumpet  kicks  off  later  than  on  the  album version,  leaving  room  for  a majestic and unreleased introduction on strings.

Cheyenne  - Cheyenne tells Jill to bring water to the workers.

Prima del duello  The   scene   of   the   duel   has   remained anchored    in    every
one’s    memory.    Amasterpiece  of  directing  and  of  musical underscoring.  This  unreleased  version  is extended  in  order  to  give enough time  to Frank  to  find  the  right  position  in  front  of Harmonica, who then moves closer to him. 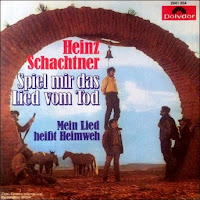 Duello finale  - As  they  stand  immobile,  Harmonica  has  a longer flashback and the whole scene is now revealed:  the  indistinct  silhouette  was  the one   of   a   younger   Frank,   bringing   to completion  his  ruthless  plan  in  the  most famous and original torture scene of cinema history. Harmonica breathes music as he in vain tries to prolong as much as possible the life  of  his  brother  (played  by  producer Claudio Mancini), the latter having his neck inside   a   rope   and   his   feet   on   young Harmonica’s  shoulders.  The  version  heard is  very  close  to  the  one  released  as Duello finale, still with some differences though.

This  is  the  climax  of  the  movie,  justifying the long wait and actually magnified by it. L’ultimo rantolo Harmonica now kills Frank, revealing at the very   last   moment who   he   is and   his motivation  for  revenge.  The gasp in  the harmonica are now Frank’s.

Addio a Cheyenne - Cheyenne and Harmonica both leave, and it appears that  Cheyenne had been injured during  the  fight  at  Morton’s  train. As the man sits on the ground and dies, we finally get  to  hear  the  full  version  of  Cheyenne’s theme, even longer than on the album (with no new music though, just a couple of lines that   are   repeated).   This   is   actually   the moment where Alessandroni’s whistle first appears in the movie, as a late reminiscence of the Dollars trilogy.

Finale - As the first train arrives to Sweetwater, Jill goes out to bring water to the workers, and Leone  puts  an  end  to  his  epic  movie  on  a grandiose version of Jill’s theme.

Addio a Cheyenne - As the  end credits roll  and we see Harmonica on horseback taking Cheyenne’s body away,  the album version  of  Cheyenne’s theme is heard.

We see that many tracks heard in the movies are   still   unpublished.   This   is   partially compensated    by    the    fact    that    many published tracks are not heard in the movie, namely:
Come   una   sent enza, Il   grande massacro, L’arrivo  alla  stazione, Duello finale and Nascità di una città. Not counting of course the many songs which Morricone derived later from Jill’s theme, for Mireille Mathieu,  Katia  Ricciarelli,  Dulce  Pontes and  Hayley  Westenra,  plus revisions  for Edda  Dell’Orso,  Yo  Yo  Ma  and  for  live concerts. version    of    the    soundtrack,    where    a    detailed description of such differences.