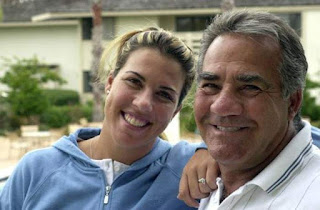 Stefano Capriatti was an Italian stuntman and second unit director. He worked on several Spagheeti Westerns including being the assistant director on “Doc” and “Chato’s Land” and doing stunts on “100 Rifles” and appearing in a supporting role in “Another Dollar for the McGregors”. He married to Denise R. Deamicis in the mid-1970s and the couple had two children a daughter named Jennifer Maria born in 1976 and a son Steven who became a lawyer.
Stefano, groomed his daughter Jennifer from birth to be a top tennis player. She set a number of youngest-ever records at the start of her career. She made her professional debut in 1990 at the age of 13 years 11 months, reaching the final of the hard-court tournament in Boca Raton, Florida and the youngest to ever be in the WTA Top 10 when she was just 14 years old. She won a gold medal at the 1992 Olympics in Barcelona.
Posted by Tom B. at 3:33 PM