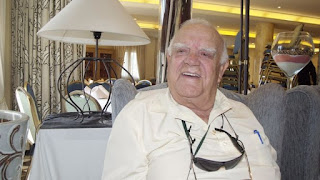 The Almería Western Museum of Cinema (Bar Ambrosio in the San Rafael Polygon in Huércal de Almería) today offered a tribute to actor Eduardo Fajardo at 9:00 p.m. A star was given with his name, a diploma and a party thrown in his honor, the writer José Enrique Martínez was intervened.

Veteran actor Eduardo Martínez Fajardo was born in Meis, Pontevedra. Within a few days of life his parents moved to La Rioja, his childhood will pass in Haro, where he confessed to feeling very good being still a teenager he moved to Santander, where he studied for his Baccalaureate. In 1942 he began his acting career, starting as a voice actor that continues until 1946.

With Cifesa he signed a contract as an exclusive actor for several years which gave him great successes; he debuted in the cinema with the film Heroes of 95, by Raúl Alfonso (1947), inaugurating in this way one of the most bulky filmographies of Spanish cinema, which reaches over 180 titles.

In 1953 he moved to Mexico, where he combined his participation in the cinemawith that country with television appearances; among them Tehuantepec by Miguel Contreras Torres (1954), Tizoc: Indian love by Ismael Rodríguez Ruelas (1957). On his return to Spain he resumed his film career with a frenetic activity that leads him to shoot an average of fifteen titles per year in which the roles of a villain abound in Spaghetti westerns such as The Seventh Cavalry (1965) by Martin Herbert and Django (1966) ) by Sergio Corbucci.

In his last years of professional activity, he combined film and dubbing with appearances on television (La Barraca, 1979, Los gozos y las sombras, 1982; Tristeza de amor, 1986) y teatro, en el que pasó de la actuación (Cándida, 1985), The joys and shadows, 1982, Tristeza de amor, 1986) and theater, in which he went from acting ( Cándida, 1986), to direction, with the project Theater without barriers for people with disabilities, of which he has been responsible since 2002. In this last decade he has been seen in tributes to colleagues in film and theater festivals with the enviable state of health.

He has worked on 183 films, 75 plays and some 2,000 interventions on television in Spain and Mexico, as well as participating in productions in Italy, Germany, France, Great Britain and the United States. Currently, he has been living for many years in Almeria (known throughout the world as the land of cinema), where he has made so many films. It has been in Almeria where he inaugurated the 'Paseo de las Estrellas'.

You Tube link: https://www.youtube.com/watch?v=-euAsKepVaQ&feature=youtu.be&fbclid=IwAR2EtIX5RiY0eyclR2n2O7DjvsG4KdNSzr0eVUhI3wQCaQLEQIbpwd1HYEE
Posted by Tom B. at 6:21 AM