Arthur Brauner: "I do not believe anyone else and never!" (Part 2)

After the war, you returned to Germany, stayed in Berlin. Was it worth doing?

At first we were going to America, to be with friends. But the trip was delayed because of a guarantee from a relative in the United States, which was necessary for the invitation. And then I decided that for the time being I would make the film I dreamed of - “Morituri”. Why did I decide that? When I returned to Germany on a cart of a Polish peasant, we drove into the woods. The Pole stopped the horse and decided to track down a shorter way. While he was going somewhere, I, too, climbed down from the cart to stretch my legs, tied my horse to a tree and saw a huge pit nearby. It was a monstrous ravine with bodies of people shot dead at the bottom. There I noticed a boy of ten or twelve, he layed there with his eyes open. Those eyes! They made the impression that even a revolver aimed at me would not have caused so much fear! As if the boy wanted to say - do not forget us ... Then I swore that while I was alive, I would never forget them! And I kept my promise. “Morituri” was the first of many others. 24 films about the victims of National Socialism have now been collected at the Goethe Institute, they will be distributed in 150 countries. In Jerusalem, in Yad Vashem, they opened a media library under my name, where they show these films. The Film Museum in Frankfurt, the Jewish Museum in Berlin also collect films in their collection.

The film "Morituri" You shot in very difficult conditions. Tell me how it was?

During the shooting, something was always missing. There was not only little food, but also little electricity. Without electricity, the movie cannot be made. When our gasoline generator lost its breath, I asked the commandant in Karlshorst to stretch the power line for us. I had a sense of mission, I did my best to accomplish it. But during the night, filming in Prenzlau and Eberswalde, the lights went out anyway ... Then there was a scene in which the guards of the concentration camp shot prisoners. For this, two dozen Red Army soldiers were detached, they had to change into SS uniform. As soon as they started shooting, my cameraman ran up to me - he was seriously worried about his life. Statists got it too. The fact is that there were no blank, only real bullets! Fortunately, no one was hurt.

Tell me, what are the distinguishing features of a good producer?

He is like a conductor who gathers the most talented musicians around him. At the same time, he is allowed to intervene, because he is the one who has the vision and lives to carry it out.

Herr Browner, and today you are watching Westerns?

When there is time, but only those in which I have a special interest. For example, Westerns with Clint Eastwood, old Westerns with Robert Taylor. Do you know that my Western “Old Shetterhand” in the foreign box office was better than all the other screen versions of Karl May, filmed by Wendland? Why? Because the jokes of Ralph Voltaire and Bill Ramsey in this film are not as flat as in others. I tried to make the film to be internationally recognized. It brought in more than two million. In France, “Old Shetterhand” went under the name “Red Gentlemen” / Les Cavaliers rouges - this is how they designated Winnetou and his Apaches.

Is it because the film was so well received in other countries that it was closer to the traditional western?

Karl May does not have a book called Old Shetterhand. It was a completely original story. Here, on the terrace of this house, an idea was born. I called the screenwriter Ladislas Fodor, and the two of us thought about what was at stake. We were well aware of how other Winnetu films were made, so we had to invent something completely different. We had to invent a long time, that at some point history it could be born. Fodor told me that this is it. He worked for ten or twelve years in Hollywood and was very well versed in the subject. At first he began to write, then Robert A. Stemml joined, and they began to work together, until finally they said: now you can shoot. 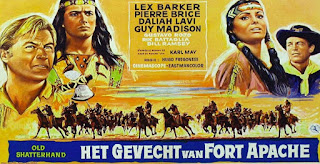 They say that director Hugo Fregonerise appeared thanks to Guy Madison?

Quite possible. Hugo Fregonese was very good. I cared more about Rick Battaglia, who worked with me in other films.

“Yes, but there were a lot of problems with Rick.” He often fell due to illness ...

No, we did not have any problems.

“And yet in Winnetou and Shatterhand in the Valley of the Dead, he fell ill, and during the filming of Aztec Treasure, he got skin inflammation ...”

Is it true that the role of Zhut in that film should have been played by Mario Adorf?

I’m not sure, I cannot remember. Mario Adorf would have been good, but Rick was not worse. It is unlikely that you would find someone better ... We had long wanted to invite him for a role in an adventure film, but, alas, something didn’t go well with him, he had broken away from us. It turned out later.

Did you have a long-term contract with him? After all, producer Horst Wendlandt then engaged him for Winnetou III ...

No, there was no such contract with him. But with Gert Frebe was. We made twelve films with him. He was a very difficult person, especially in character ...

How did you work with Kurd Jurgens?

With Kurd Jurgens we were good friends. By the way, he coined my nickname “Atze”. He often visited me here. While visiting with us, it so happened, he would come around three in the morning, he would go to the kitchen in the fridge and get something to eat and drink. But he never woke me. Yurgens was a very delicate person. He said: “I know that I’m not a great actor like Otto Wilhelm Fisher, but they love me the same way because they trust me because I’m a good type of actor for Fisher’s pick.” But you have not yet asked about Horst Wendland, did not specify where the film versions of Karl May came from ...

“Thanks to his son Matthias Wendlandt.” Or is that not true ?

Aah .. it's a fable. By that time, Wendlandt had been with me for six or seven years as the head of filmmaking. He was a very good employee. I trusted him, he was honest. In general, well done, I cannot say anything here. We were constantly looking for something new for a movie. Among such material, of course, was Karl May. Yes, there were a lot of things, even the Leather Stocking Tales from the Last of the Mohicans of James Fenimore Cooper. But it so happened that at first they removed the bad film version of May, cheap.