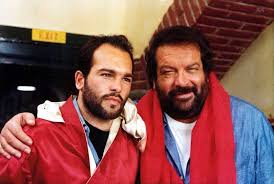 "Fists and smiles" here are some memories of my father Bud Spencer: his son Giuseppe Pedersoli recalls two years after the death of his actor father.

The Swimming champion worked in the cinema, where he made his debut at 38 years of age. It was immediately successful. Together with Terence Hill, “They Call Me Trinity” reached a popularity that broke through Italian borders. Two years after his death, his son, Giuseppe Pedersoli, remembers who was Bud Spencer.

A movie or a character to which his father felt much attachment to?

"As a character, Piedone, because he used his own voice and was shot in Italian to give more truthfulness to the Neapolitan character. Among the films, “All the Way Boys”, because it gave birth to his passion for flying, and he became a pilot.”

From swimming to the cinema, almost by chance?

"Cinema had been a lucky decision, which is why he enjoyed a 40-year-long career of success and was looked on as a privilege, without any frustration at the end. He did not suffer from decay, because sport taught him that there are victories and defeats ."

Did your father have many other passions?

"He was very curious and had a young inquisitive mind. Music was a great passion, but his regret was that he had not studied it. With the guitar he went to parties with friends, he once played, by chance, with a young Domenico Modugno.”

With Terence Hill, a true friendship. An anecdote?

"I produced their last film, “Troublemakers”, Terence was also the director and I saw my father completely trust him."

Bud Spencer is very popular abroad. Do you believe that our country has valued him enough?

"In Italy in the 1970s, the light-hearted western was not appreciated by the critics. Over time, however, they realized that, beyond the apparent lightness, there were important contents, against racism, drugs, violence. Also in September 2018 at the Pan di Napoli there was an interactive exhibition, which will then stop in other cities.”

Did he have any professional regrets?

"I do not believe so. He also received offers from Fellini and Ferreri, but it was he himself who chose or refused the offers, because not to be rude he did not consider himself an actor.”

The relationship with popularity?

"He was very surprised; my father was always just himself, both in films and in life."

The philosophy of your father's life?

"Of the small problems you have to forget, the goal in life is to move forward in the pursuit of happiness."
Posted by Tom B. at 7:47 AM