“Western, Italian Style”: A behind-the-scenes look at the making of Sergio Corbucci’s “Il Grande Silenzio” and other Spaghetti Westerns

We here at Night Flight HQ love Spaghetti Westerns, the hundreds of mostly Italo-Spanish, italo-German, Italo-French or Italo-British productions that typically made during a ten year period (1964 to 1973), films that helped to launch the careers of anti-hero western characters played by Clint Eastwood and Franco Nero.

In 1968, director Patrick Morin gave us Western, Italian Style, a wonderfully informative short documentary intended to give American TV viewers a look behind-the-scenes at what was still a relatively unknown revisionist style of western movie called “Spaghetti Western,” a nickname given to typically Italo-American productions, many of them filmed on sets are located in the desert of Tabernas, near Almería, a city in the southeast of Spain, which looked very much like the deserts of across-the-border Mexico or the American southwest.

We also get to see several non-U.S. actors too, like Tomas Milian, Jean-Louis Trintignant and Klaus Kinski — the latter two seen on the set of Sergio Corbucci’s seventh Spaghetti Western, Il Grande Silenzio, or The Great Silence, which was originally denied distribution in the U.S. due to its over-the-top violence.

The Great Silence — which boasts one of Ennio Morricone‘s most beautiful film scores, including this haunting theme song — was so violent, in fact, that it was given an “18 rating,” meaning that audience members in Italy needed to be at least eighteen years of age to see one of Corbucci’s best films in theaters, which certainly didn’t bode well for box office success (the film provides us with a rare look at the then-active, now defunct Cinecitta Studios in Rome). 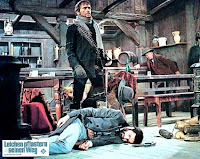 We see Corbucci talking on the set of The Great Silence, about the violence in the film and the nature of violence in Spaghetti Westerns in general, comparing what the viewer might see in comparison to the violence seen in the popular James Bond franchise.

Corbucci even shot an alternate, more upbeat and essentially non-verbal ending for The Great Silence for certain film markets, mainly North African countries and Japan, but it’s unlikely the less-bleak ending — which was filmed without direct sound, like many Spaghetti Westerns — was ever used.

Jean-Louis Trintignant, one of The Great Silence‘s lead actors, espouses during the documentary about how he’d practice quick-drawing his pistol by pulling a sock off his hand and then reaching for a long-steamed artichoke in his pocket.

He wears gloves during the film, which takes place during a cold, snowy winter setting — lensed on location near Cortina d’Ampezzo, in the Dolomites, the heart of the southern Alps in the Veneto region of Northern Italy, although we also in the documentary see how lots of white shaving cream was used when there wasn’t enough snow on the ground — and it’s a pretty safe bet that Quentin Tarantino is a big fan of the film as it has to have been one of the inspirations for his most recent movie, The Hateful 8.


We’re also given a behind-the-scenes look at Sergio Leone’s Once Upon a Time in the West, Sergio Sollima’s Corri, Uomo, Corri (Run, Man, Run), and two by director Enzo G. Castellari — Ammazza Tutti e Torna Solo (Kill Them All and Come Back Alone), and I tre che sconvolsero il West (also known as Vado, vedo e sparo), the 1968 Spaghetti Western released in the U.S. as One Dollar Too Many, starring Antonio Sabàto, John Saxon, and Frank Wolff. 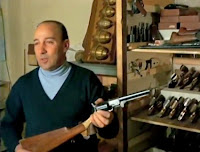 The documentary also shows a stuntman readying himself for a scene, and a quick visit to a studio armory, where we see an impressive collection of rifles and pistols used in Spaghetti Westerns, including a carbine — a long-handled guns, bigger than a pistol, but smaller than a full rifle — used by Lee Van Cleef in the film For A Few Dollars More. We also see a demonstration of the destructive power of wax bullets, which were used in many classic Spaghetti Western shooting scenes.

The documentary also gives us a chance to see the Bunkhouse Saloon, a club in central Rome that served as a home-away-from-home hangout for Americans, where an act named John and Wayne (John Ireson and Wayman Parham) provide musical entertainment (they also sing the song that plays during the doc’s title sequence).

We asked Night Flight’s resident Spaghetti Western expert Eric Zaldivar what his thoughts were about Western, Italian Style, and here’s what he told us:

“It’s such a thrill to see even fleeting footage of Rome during this time period, Spaghetti Western ground zero, during the genre’s most prolific year! To an American who loves these movies, it is hard to imagine there was ever a time and place where a programmer as unknown as If You Meet Sartana Pray For Your Death was ever grandly advertised in poster form on the streets of a metropolitan area. Frank Wolff, the American actor who appeared in some of the best entries of the genre (Once Upon a Time in the West, The Great Silence, God Forgives …I Don’t) and also one of the worst (I Came, I Saw, I Shot), is kinda the perfect choice for narrator of this television doc. His expansive credentials lend his scripted words credence since he experienced varying levels of productions…the good, the bad and the ugly.” 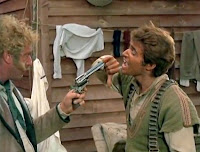