We continue our search for locations for “The Big Gundown”. After Cuchillo kills two men who have broken into Rosita’s room he escapes through a window into the night. The scene then shifts back to the hacienda and Baron Von Schulenberg. The Baron explains to Crobett he has developed his own holster when he realized that the quickness of the draw was more important than the precision of the shooting. After the demonstration of his quick draw the Baron goes to see about the horses. When he approached the door to the courtyard he declares the sun looks like a large pool of blood.

This scene was filmed in the courtyard at El Romeral just outside of San Jose, Spain. 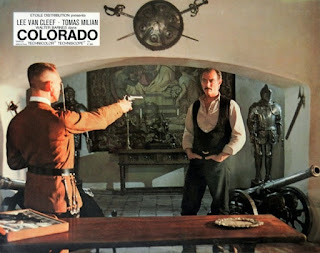