Who Are Those Composers? ~ Maurice Jarre 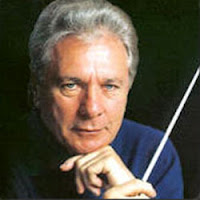 Maurice-Alexis Jarre was born in Lyon, Rhône, France on September 13, 1924. Jarre was the son of Gabrielle Renée (née Boullu) and André Jarre, a radio technical director. He first enrolled in the engineering school at the Sorbonne, but decided to pursue music courses instead. He left the Sorbonne against his father's will and enrolled at the Conservatoire de Paris to study composition and harmony and chose percussion as his major instrument. He became director of the Théâtre National Populaire and recorded his first film score in France in 1951. Although he composed several concert works, Jarre is best known for his film scores,

In 1961 Jarre's music career experienced a major change when British film producer Sam Spiegel asked him to write the score for the 1962 epic “Lawrence of Arabia”, directed by David Lean. The acclaimed score won Jarre his first Academy Award and he would go on to compose the scores to all of Lean's subsequent films. He followed with “The Train” (1964) and “Grand Prix” (1966), both for director John Frankenheimer, and in between had another great success in David Lean's “Doctor Zhivago”, which included the lyricless tune "Lara's Theme" (later the tune for the song "Somewhere My Love"), and which earned him his second Oscar. He worked with Alfred Hitchcock on “Topaz” (1969); though Hitchcock's experiences on the film was unhappy, he was satisfied with Jarre's score, telling him "I have not given you a great film, but you have given me a great score." His score for David Lean's “Ryan's Daughter “(1970), set in Ireland, completely eschews traditional Irish music styles, owing to Lean's preferences. He contributed the music for Luchino Visconti's “The Damned” (1969), and John Huston's “The Man Who Would Be King” (1975). Later renowned scores include “Mohammad, Messenger of God” (1976), “Lion of the Desert” (1981), “Witness” (1985) and “Ghost” (1990).

Jarre became "one of the giants of 20th-century film music" who was "among the most sought-after composers in the movie industry" and "a creator of both subtle underscoring and grand, sweeping themes, not only writing for conventional orchestras... but also experimenting with electronic sounds later in his career".

Jarre was nominated for nine Academy Awards, winning three in the Best Original Score category for “Lawrence of Arabia” (1962), “Doctor Zhivago” (1965), and “A Passage to India” (1984), all of which were directed by David Lean. He also won four Golden Globes, two BAFTA Awards, and a Grammy Award.

Jarre was married four times, the first three marriages ending in divorce. In the 1940s, his marriage to Francette Pejot, a French Resistance member and concentration camp survivor, produced a son, Jean-Michel Jarre, a French composer, performer, and music producer who is one of the pioneers in electronic music. When Jean-Michel was five years old, Maurice split up with his wife and moved to the United States, leaving Jean-Michel with his mother in France.
In 1965, Jarre married French actress Dany Saval; together they had a daughter, Stephanie Jarre. He next married American actress Laura Devon (1967–84), resulting in his adopting her son, Kevin Jarre, a screenwriter, with credits on such films as “Tombstone” and “Glory” (1989). From 1984 to his death in Malibu, California on March 29, 2009, he was married to Fong Fui. Khong.