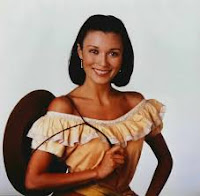 American film, TV actress Patrice Martinez died in Burbank, California on December 25, 2018. She was 55. Martinez was born in Albuquerque, New Mexico on June 12, 1963 and will be remembered for her leading role in “The Three Amigos” (1986) as Carmen but most of all as Victoria Escalante on the 1990-1993 TV series 'The New Zorro' starring Duncan Regehr. Patrice also appeared as Kish-Kao-Ko in 1998 German TV film 'Winnetous Rückkehr' with Pierre Brice.
Posted by Tom B. at 8:03 AM