The Year in Westerns

While its offerings were far from traditional in 2018, the genre gave fans plenty of interesting releases to get into. 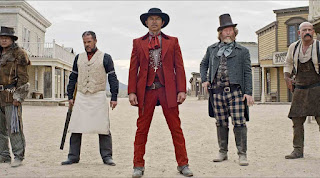 You could say 2018 was a good year for westerns that galloped off the beaten track.

Joel and Ethan Coen, the award-winning filmmakers who gave us the Academy Award-nominated “True Grit” remake in 2010, returned to the genre with “The Ballad of Buster Scruggs”, an anthology of eccentric Wild West tales starring Tim Blake Nelson, James Franco, Liam Neeson, Zoe Kazan, and Tyne Daly. Twilight star Robert Pattinson got his cowboy on in the seriocomic Damsel as an earnest pioneer who journeys into dangerous territory in pursuit of his sweetheart (Mia Wasikowska) with Butterscotch, a miniature horse that he hopes to offer as a wedding present.

Michael Greyeyes, whom we profiled in our July 2018 issue, brought impressive dignity and substance to his stellar performance as Sitting Bull in Woman Walks Ahead, Susanna White’s engrossing fact-based drama about the relationship between Swiss-born, New York-bred artist Catherine Weldon (Jessica Chastain) and the legendary Lakota chief. John C. Riley and Joaquin Phoenix memorably played the title roles in “The Sisters Brothers”, Jacques Audiard’s audaciously offbeat revisionist western (based on the novel by Patrick deWitt) about notorious assassins who unexpectedly get a shot at redemption.

Venturesome moviegoers also had the opportunity to sample films from foreign shores that were heavily influenced by spaghetti westerns and classic American horse operas. Chief among these impressive imports: “Marlina the Murderer in Four Acts”, Mouly Surya’s Indonesian drama detailing a rape victim’s bloody campaign of vengeance; “Sweet Country”, Warwick Thornton’s rugged Australian western about an Aboriginal stockman forced to flee through the outback after shooting a white farmer in self-defense; and Michael Matthews’ “Five Fingers for Marseilles”, a slow-burn melodrama set in post-Apartheid South Africa.

Meanwhile, back at the ranch: While fans of sagebrush sagas may bemoan the relative scarcity of traditional westerns on view at theaters and drive-ins everywhere, the production of such fare specifically designed for home video release continues at a steady pace. Indeed, industry experts seem to agree that if you can keep your budget this side of reasonable and, better still, corral a recognizable character actor (or country music star) who can provide marquee allure by looming large on DVD and Blu-ray packaging and in online trailers, you stand a good chance of turning a profit by selling a sufficient number of what the bean counters call “units.” 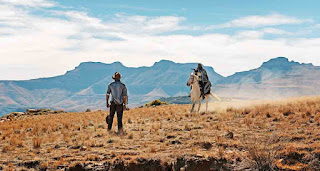 “The numbers prove there’s a huge market for westerns,” says indie filmmaker Justin Lee, director of two notable 2018 direct-to-video releases, “Any Bullet Will Do” and “A Reckoning”. “People are very dedicated to them. The trouble is there are few westerns that come out these days that seem to have any real heart to them. But if you look at the sales figures at the big box retailers like Walmart and Target and Best Buy — they prove that the people in that particular demographic for westerns, they want a hard copy of something. It’s not enough for them to view it as video on demand. They want to own something.”

Lee — who credits the 2011 – 16 AMC TV series ‘Hell on Wheels’ as “a huge factor in revitalizing the western” in all media — admits he occasionally wondered whether he had bitten off more than he could chew when he opted to make his directorial debut by filming “Any Bullet Will Do” on Montana locations “in the dead of winter” on a limited budget. “I now think I could go shoot on any location, and it wouldn’t be as bad as that one was,” he says, adding that, on one especially memorable day during production, “We actually had grizzly bears attack one of our cars.”

Fortunately, Lee had strong support from a dedicated cast and crew — and a touch of star power courtesy of Golden Globe-winning and Oscar-nominated actor Bruce Davison (“Ulzana’s Raid”, “Longtime Companion”), who signed on for a small but key supporting role. “I can’t say enough about Bruce’s performance,” Lee says. “And let me tell you, he came ready to play. I don’t want to say I didn’t have to do much — but, well, I really didn’t have to do much with Bruce. To this day, I’d say those were the best two days I’ve ever spent with an actor.”

Speaking of star power: C&I reader favorite Lou Diamond Phillips, fresh from his multi-season run as Henry Standing Bear on the A&E and Netflix series ‘Longmire’, managed to steal every scene that wasn’t bolted to the floor with his gleefully fearsome performance as manic gunslinger Johnny Kane in “Big Kill”, a hugely entertaining and unabashedly old-fashioned western that received a limited theatrical release in 2018.

The movie, written and directed by costar Scott Martin, tells the story of Philadelphia accountant turned Wild West tenderfoot Jim Andrews (Christoph Sanders), who travels to the Arizona mining town of “Big Kill” to reunite with his brother, owner of a local saloon. Along the way, he makes the acquaintance of two roguish gamblers — Jake Logan (Martin) and Travis Parker (Clint Hummel) — who, truth to tell, are much more adept at drawing guns than dealing cards. A good thing, too, because Jim needs all the help he can get when, after arriving in “Big Kill” with his new buddies, he discovers the town is controlled by the Preacher (Jason Patric), a soft-spoken sociopath who solemnly delivers last rites to his victims, and Johnny Kane (Phillips), who takes unseemly delight in doing the Preacher’s dirty work. 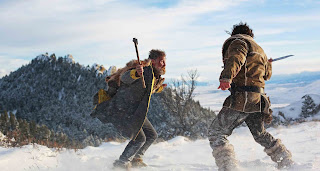 Martin confesses he often found it difficult to maintain a straight face while acting opposite Phillips during on-location filming in New Mexico: “Every one of these line reads he came out with, he did them with such fun and this, like, twinkle in his eye. I’d be sitting there, and there were a couple of times when we’d be in the middle of a scene, shooting, and I have to say: I caught myself being an audience, and just watching him. He was so funny. I’d tell myself, ‘OK, you’ve got to stay in character, you’ve got to stay in it.’ But ... .

“OK, I don’t want to give too much away, but there’s a big shootout outside, and he comes walking back in and looks at us, points his finger, and goes ‘Boom!’ And then walks back out. And I just started dying laughing. I was like, ‘You gotta be kidding me!’ And that smile — I was not expecting that smile all the time. It was just creepy, in all the best ways.”

More serious scariness abounded in “Mohawk”, a critically acclaimed and relentlessly violent 2018 drama — released simultaneously in theaters and as video on demand — that took a blunt-force approach to dramatizing a bloody conflict between Native Americans and vengeful military renegades against the backdrop of the War of 1812.

“Mohawk writer-director Ted Geoghegan and co-writer Grady Hendrix are horror veterans,” Noel Murray of the Los Angeles Times noted in his review, “but their new movie traffics in a different kind of fear — more existential than supernatural. A revenge thriller tied to America’s grim past, Mohawk is a lean, gritty film, which mostly overcomes the limitations of its low budget thanks to focused plotting.”

Alan Scherstuhl of the Village Voice added that Geoghegan and Hendrix “offer viewers about five minutes of calm over the course of the film’s fleet 90. Mostly, this is effective hunt-or-be-hunted stuff, with two Mohawk — a young woman (Kaniehtiio Horn) and man (Justin Rain) — and a sympathetic Brit (Eamon Farren) harried through the woods by an American militia, despite the Mohawk nation’s neutrality in the larger war. Pursued and pursuers continually get the drop on each other, and Geoghegan ... and his micro-budget tech team ace the showdowns, shootouts, and spurts of blood.” 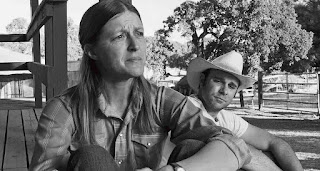 For those who prefer less graphic mayhem and more subtle emotion in their movies, there was “The Divide”, an uncommonly compelling and emotionally rich modern-day western starring and directed by veteran actor Perry King. Effectively filmed in retro black-and-white and generously filled with affecting performances, the drama was a long-gestating labor of love for King, who shot it on and around his 500-acre cattle ranch in Northern California. Yep, that’s right: In his other life, he’s a cowboy.

“Years ago,” King said, “I did this movie with Sean Young, a TV-movie western called “The Cowboy and the Movie Star”, which was a nice, sweet film. And I loved the character I played, a guy who was getting divorced and was about to lose his cattle ranch because his ex-wife was going to take it. Sean Young was the movie star. She shows up and they meet each other and she ends up buying the ranch and giving it to him. They have a love affair and blah, blah, blah.

“Well, like I said, I loved making that movie, just loved it. At the time, I owned a house and 40 acres up in this area of Northern California. I met this guy who had been a cowboy his whole life who was running cows on this chunk of land right by my house, 500 acres. He loves westerns, too, and he was the real deal. He taught me lots of stuff about real cowboying, little details that are so important. Like how you pony a horse, how you lead a horse, stuff like that. I put a lot of effort into learning how to be a real cowboy. And at the end of it, I thought, ‘I want to play this part again so badly.’ But I never could get cast in westerns. Because when I was younger, I was so damn pretty. Now, I could get away with it. But back then, people would never cast me in westerns.

“So finally, when this land came up for sale, right contiguous to my house, I thought, OK, screw it. If I can’t play this character again — I’ll just become him. And I did.” 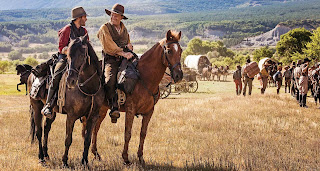