Who Are Those Gals? ~ Monique Chaumette 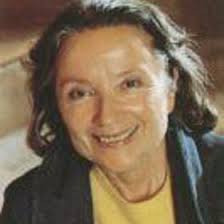 Monique Chaumette was born Helen Claire Monique Chaumette in Paris, France on April 4, 1927. The son of a shopkeeper and a secretary, François Chaumette earned a BA in philosophy and then became a pupil of René Simon at the Paris Conservatoire .  There she met Michel Piccoli, whose friendship he will retain until his death.

She is the sister of comedian François Chaumette [1923-1996]. Monique is particularly known for her roles in historical soap operas on television.  In terms of dubbing, she lent her voice to Darth Vader in the first episode released in the cinema in 1977 the Star Wars film saga (she will be replaced by Georges Aminel in the following episodes) and Khan Noonien Singh (played by Ricardo Montalban ) in Star Trek 2: The Anger of Khan .

She was the wife, for a few years, of the writer Albert Cossery1 [1913-2008]. In 1962, she married Philippe Noiret, whom she met at the National People's Theater. They have a daughter, Frédérique Noiret, born May 25, 1960, who is an assistant director of film and screenplay and a granddaughter, Deborah Grall, also an actress, daughter of Frédérique and Sébastien Grall, director [1954-2013].