Cortijo Blnco is a farm located in the Campello area at the entrance to the Barranco del Infierno; there was built a set (of which remain scare traces) for the film “The Big Gundown” (1967): and the Franciscan friar mission in which Cuchillo (Tomas Milian) arrives after the desert crossing in which later also arrives Lee Van Cleef . This set then appears in the initial part of “A Minute to Pray, a Second to Die” / “Escondido” (1968) (in the sequence in which Alex Cord and Giampiero Albertini face Aldo Sanbrell) and in the final part of “A Train for Durango” (1968). The site was also used in “The Mercenary” (1968). The posterior part of Cortijo Blanco's edifice plays an important role in “The Longest Hunt” (1968) (and the headquarters of the major / Keenan Wynn’ army); in this film we also see the "Cueva" (stable or dwelling dug in a hillside) in the immediate vicinity; the stressed "Cueva" which was also used in “God Forgives ... I Don’t!” (1967). 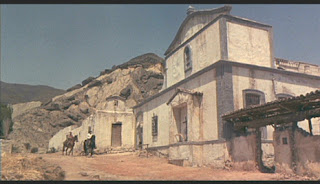