Who Are Those Composers? ~ Vlastimil Hala 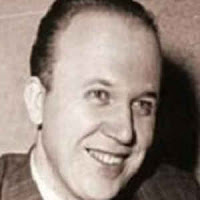 Vlastimil Hala was born on July 7, 1924 in Sousa near Most, Czechoslovakia. His younger brother, Kamil Hala [1931-2014, became a composer, pianist, conductor and arranger. After studying at the Business Academy, and a short run of his own Swing Stars orchestra (1945-1946), he became a longtime trumpeter of the Karel Vlach Orchestra (1946-1962), for which he arranged and composed.

At the same time, he studied musically at the Union of Musicians and privately with composer Jan Rychlík (1948-1954). Vlastimil Hál then worked as the music director of Czechoslovak Radio Prague (1963-1984) until his retirement.  At that time, Hála was a member of the Union of Czech Composers (SČS).  At the SČS he was also the head of the jazz section. As a music composer, he helped create a distinctive form of Czech popular music.

In his work, he did not avoid the breadth of genres - orchestral compositions, evergreen songs (eg "Let's get to the apartment", "Song of Time", "Day is beautiful", "Hello, Mr. Maupassant"), jazz pieces "Pepper and Salt", "Day and Night in Havana", "Greetings to Orchestra," "Friday Boogie", "Rhapsody", "Fireworks" or "Rudolf's Number"), musicals ("Lemonade Joe" "," The Lady in the Halls "," The Fool on the First Floor "," The Lightheads ", etc.), stage music (among others" Magic Circus "," Charley's Aunt "," Hussars "," Nasredin " "Hard Barbora", "Ballad of Rags") for numerous theaters (eg the National Theater in Prague, Karlín Music Theater, ABC Theater), radio music ("Hussars") and mainly film and television music.

He contributed with his professional articles and finally with the book "The Basics of Arranging Modern Popular Music" (1980).  For the film STARCI NA CHMELU (1964) Hála was awarded with Jiří Bažant and Jiří Malásk Special award for the use of songs in the film (1965) and Hála and Rychlík for the parody LIMONAD JOE ANEB KOŇSKÁ OPERA (1964) Award for the music for music category (1965) ) in II.  a competition for a musical work created for the film in 1964, all three Honorable Mention (1967) in the same competition (already in 1966 for the 1966).

Shortly before his death, Hala was named Merited Artist (1984).  The composer, trumpeter and arranger Vlastimil Hála died in Prague on July 29, 1985.